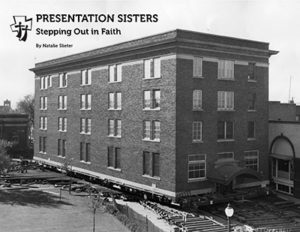 Aberdeen Sisters Stepping Out in Faith

The early sisters arrived in Wheeler, South Dakota, in 1880 but soon after traveled north to Fargo, Dakota Territory. In 1886 the sisters came to Aberdeen to further education, something in which they were quite experienced. Toward the turn of the century, an epidemic of diphtheria became a serious threat to Aberdeen. The town implored the sisters for help and they were sent out to tend to the sick in their homes.  A few months later, with the occurrence of typhoid fever, the Academy classrooms were turned into a temporary hospital.

The sisters answered the need by showing compassion and caring for the sick, even though they had no training or experience in nursing. To meet the need in Aberdeen, the sisters built their first hospital, thanks to the courage of Sister Joseph Butler, who chose to step out in faith.

“Sister Joseph Butler said the ‘yes’ that got us involved in healthcare,” Sister Joan Reichelt said.

Sister Joan is the executive vice president of culture for Avera Health. She says once the hospital was built, a nursing school was opened and the doctors trained the Sisters to become nurses. Between 1904-1911, the sisters opened three more hospitals – one in Mitchell, South Dakota; Miles City, Montana; and Sioux Falls, South Dakota.

Most of the sisters went on to earn master’s degrees in nursing to ensure they could continue to care for people. During this time, the sisters oversaw every aspect of running the hospitals, so while many of them became nurses, some sisters fulfilled other roles to meet every need. 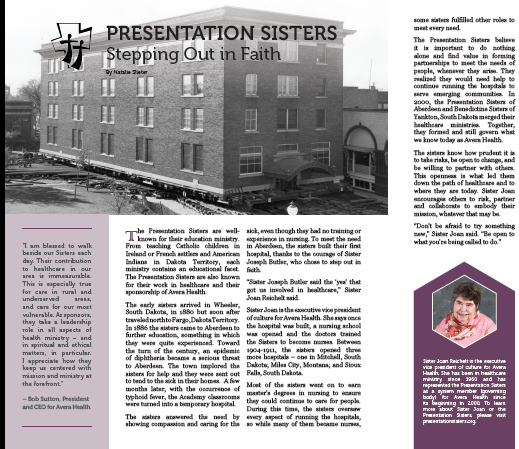 The Presentation Sisters believe it is important to do nothing alone and find value in forming partnerships to meet the needs of people, whenever they arise. They realized they would need help to continue running the hospitals to serve emerging communities. In 2000, the Presentation Sisters of Aberdeen and Benedictine Sisters of Yankton, South Dakota merged their healthcare ministries. Together, they formed and still govern what we know today as Avera Health.

The sisters know how prudent it is to take risks, be open to change, and be willing to partner with others. This openness is what led them down the path of healthcare and to where they are today. Sister Joan encourages others to risk, partner and collaborate to embody their mission, whatever that may be.

“Don’t be afraid to try something new,” Sister Joan said. “Be open to what you’re being called to do.”

“I am blessed to walk beside our Sisters each day. Their contribution to healthcare in our area is immeasurable. This is especially true for care in rural and underserved areas, and care for our most vulnerable. As sponsors, they take a leadership role in all aspects of health ministry – and in spiritual and ethical matters, in particular. I appreciate how they keep us centered with mission and ministry at the forefront.”