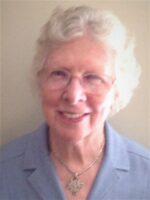 An Interview with Diamond Jubilarian Sister Maura Fitzsimons (Union US)

Tell us a little about your place of birth, your family, up-bringing, education, early memories.
I was born in County Cavan, Ireland, third of six children, three boys and three girls. Being the eldest girl, I helped with the household chores as well as serving in the little grocery shop my mother owned. My father grew up on a farm but married into my mother’s house. He was interested in building and carpentry; did renovation work and built many houses in the surrounding county. He rode his bicycle until he was 100 and lived in good health until he was 106 years.

My mother taught us our prayers and said the family rosary every night. She was easy-going and kind but would threaten us with a wallop of the dishcloth when we got too rowdy!  My memories of childhood are pleasant: we climbed trees, pretended saying Mass on the rock, “tumbled-the-wildcat,” and had lots of outdoor fun, and squabbles too!  We met up with other scholars and walked to school through the fields.  On the way home, we often took some rare detours leaving my mother to worry that we had followed the flooded river again.

How were you drawn to the Presentation way of life?
A Good Shepherd Sister and family friend frequently visited our house during her holiday times.  I admired her happy and kind ways, and looked forward to the beads and holy pictures she gave us.  Her presence seemed to stay with me.

There were three religious magazines my mother subscribed to: one of which was Presenting Christ, published by the Presentation Sisters, Bailieboro, my hometown. I read all three and loved the mission stories and pictures, but was drawn to the work of the Presentation Sisters. While working in Dublin, I contacted and met Mother Sacred Heart. During lunch, she told me about the mission in Pakistan and suggested that I enter the novitiate. I told my parents. My mother was delighted; my dad not so much.

At age 18 on November 16, 1957, I entered as a postulant with the sisters in Bailieboro and happily settled in to my new surroundings.  At that time, the novitiate and the spiritual year were fulfilled in the Pakistan novitiate.  Following my year of postulancy, I boarded the Caledonia on August 15, 1958, with Mother Sacred Heart and my two companions, Sisters Clement Murphy and Colette Fallon, for the 21-day sea voyage to Pakistan. We arrived in Karachi where we had another three-day journey by train to Rawalpindi. Pakistan became the land of my dreams. We had a strict novitiate but with so many young faces, interesting events, and new places to see, we felt at home.

What challenges have you lived through? How did your faith help you?
At age 21, I was beset by a severe depression in which local help was of no avail.  My superior and others seemed to agree that I had no vocation and would benefit by going back to Ireland and getting some help. This was painful. I returned to Ireland in September of 1964 and had some sessions with a priest psychiatrist who assured me at my first meeting that I had a vocation. I knew in my heart that I had.

I spent one year with the sisters where I had entered and helped with the daily chores; but the depression continued. I hadn’t made my final profession so when a letter of application for my vows came, I reiterated my desire to stay or join another congregation and was blessed to make my final vows in Cypress, Calif., in 1966.

During this time, my faith presented only a blank wall, but I said the Magnificat and the Hail Mary over and over and knew Mary would see me through. Also, somewhere in my spirit I saw a distant horizon with a light behind it.  I knew if I continued with my focus on the light all would be well.  It took 14 years. The depression lifted and never returned.

Where did you serve in ministry and what ministries have you been involved in?
Having finished secondary school with the Presentation Sisters, and after my first profession in Pakistan, I began study for my bachelor’s degree from St. Anne’s College, Rawalpindi. But since my term in Pakistan lasted only five years, I finished my bachelor’s later at the University of San Diego, Calif., followed by a master’s and counseling credential at Loyola Marymount, Los Angeles, also a master Catechist and other courses from various institutes.

I taught the elementary grades at a number of our schools in Southern California. In 1979 I moved to Sacramento, did some teaching, then became director of religious education, and later I moved into parish visitation with its subsequent outreach ministries. In 1993, Presentation Convent closed and I returned to St. Bonaventure, Huntington Beach, as RCIA director, a ministry I held for 14 years. During this time, I was also involved in various parish programs.

In September of 2009, I was assigned to Shaw, Miss., with Sisters Wiona Engel and Una Murphy (RIP). We opened a tutoring center for low achieving children, a weekly program for the “active ladies,” computer classes, and computer availability for adults and teens. We have been helping needy families, and our hope is to help reduce racism and segregation by our active presence among the people.

What advice would you give about facing the challenges in our world today?
Start from scratch if need be. Go gently and prayerfully with the blessing of community. Don’t be afraid to take risks.

If Nano were alive today, where do you think Nano would be ministering?
If Nano was younger, she would be on the front lines discreetly seeking out the poor, the elderly and confined, and helping with family needs. If she were older and in “lock in,” she would possibly be on the phone in support of the above; or she might be sitting at a computer organizing and contributing to the good of the congregation, or to justice issues and the environment.

What do you think Nano would do and say about facing racism and the idea of a worldwide pandemic?
She would spend time in prayer for the alleviation of the pandemic and the human needs it has created. She would understand the richness of diverse cultures, and work on bringing them together.  She would be a welcoming and inclusive presence to all.