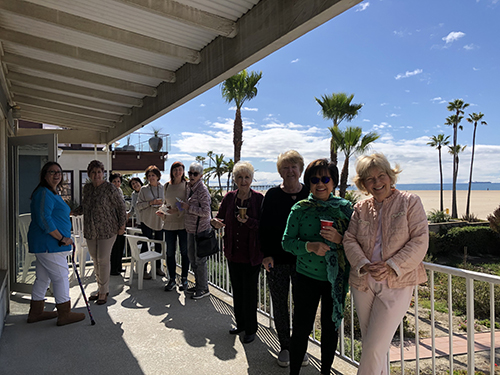 Sisters Catherine Burke and Jane Bonar, Watts, led a retreat for the Cypress Friends of Nano on March 7. Below are reflections of several of the participants.

Beaulah Dumagan: “I attended a much-needed spiritual retreat, with 28 other Friends of Nano. It was an incredible experience!  We carpooled to the Seal Beach Retreat house and were welcomed warmly by Sister Catherine and Sister Jane, our retreat animators, from the Watts Learning Center. We were given a brief tour of the beach house.

After coffee and snacks, we had our opening prayer on Lent and Nano Nagle. Our first session followed with questions that we reflected individually and then with others in the group.

Essentially, I brought these materials home, to reflect on and meditate in my own time and space.

I am most thankful for this retreat and look forward to similar beach house retreats in the future.

Mary Meier: I received unexpected blessings, when I attended the Friends of Nano Retreat. On this Saturday morning, California greeted the day, with bright blue sky, warm sunshine and glistening ocean waves. Perfect environment. But there was more! There were enriching talks, time for reflection, healthy food and drinks. I always appreciate QUIET time and I was given plenty, on this day. To ‘listen’ and ‘reflect’ were two important elements of this day.

Sister Jane Bonar and Sister Catherine Burke were our facilitators. The introduction was on Venerable Nano Nagle. Later we reflected on one of the Songs of the Journey by Raphael Considine. It was very inspirational. Nano is a great woman who took risks and the one to emulate.

The first Session was on Pope Francis, Evangelii Gaudium. Ten core goals in the fight for justice were enumerated by Bishop McElroy of San Diego. These were the core life issues of Catholic social teachings. I was blessed with our learnings, sharings and enjoyment of the group.