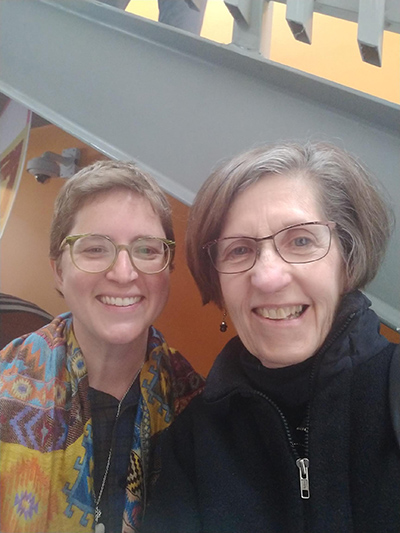 Above, left to right, Associates Sarah Gieseke and Billie Greenwood, who were volunteering not far from one another, met up at the inauguration of the new migrant assistance center in Nogales, Sonora, Mexico.

Presentation associate Billie Greenwood has volunteered for the last 14 years assisting migrants on the U.S.-Mexico border through Kino Border Initiative. She has witnessed the many challenges and injustices migrants face. Billie shares reflections of her experiences that have not only gifted her in many ways, but allowed her to make a difference.

For the past several winters, I’ve attended a daily human rights class conducted in Spanish. Considering I first learned the alphabet in Spanish only when I was 50 years old, I didn’t ever expect to be learning human rights en español. But, surprisingly, my new, broken Spanish became good enough to allow me to volunteer in assisting migrants on the U.S.-Mexico border.

At the Mexican soup kitchen where I help, providing a hot meal wasn’t the only service. Migrants also learned a daily lesson on their 30 universal human rights. Just as important, the migrants taught us daily, simply by being there. They showed us that human rights guaranteed aren’t necessarily rights received. Each migrant could cite human rights they didn’t have. So, their brave spirits impelled them to leave home and family. They sought to live where they would find the rights I take for granted. But, routinely, I saw my nation thwart their praiseworthy quest. “Why?”

I puzzle because it doesn’t make sense. We need immigrants’ labor, their skills. We need their values of family and community and faith. We need their strength of character, their ability to work hard, to risk, to create.

Why are we pushing them away, keeping them out? Who would expect that? Is it because we are afraid of “the other”? Maybe unfamiliar people intimidate us. Different is hard. Change is uncomfortable. Breaking away from the usual is challenging. We do not like the unexpected.

And immigrants bring new languages, new customs, new perspectives and experiences. So, rather than taking advantage of their positive contributions, we would rather not have to change.

Maybe our hospitality is deficient. Maybe we miss what is most important because we don’t go past the surface. Pope Francis explains how to look deeply:

“Only those who see with the heart see things well, because they know how to ‘look into’ each person: to see a brother or sister apart from his or her mistakes, hope amid difficulty. They see God everywhere.”

Look deeper. Find God. Recognize a brother, a sister in migrant asylum-seekers. There are many rewards.

Working in a different country, navigating in a foreign language was uncomfortable enough that in the beginning I almost quit. I didn’t, fortunately. Now, I’m rewarded there every day. I went – hoping to help. But, I am helped in unexpected ways:

COVID-19 on the Border

The pandemic’s unexpected arrival has worsened many things on the border – for me and for migrants. In fact, after 14 years, I can’t volunteer there this winter. The border is closed to non-essential people. No U.S. volunteers can help in the Mexican soup kitchen. But, the disruption for asylum-seekers is horrifyingly worse.

In March, the U.S. abruptly began returning asylum-seekers who are fleeing in fear for their lives, as well as other people in migration, to Mexico. Migrants are not receiving due process. All asylum processing at the U.S.-Mexico border has simply shut down.

During a pandemic, when everyone’s safety and health are at risk, our nation has turned its back on our international obligations, on any commitment to public health, on common decency.

Especially during a pandemic, we must uphold human rights, international law and due process. But, instead, we have forced the creation of impromptu, makeshift migrant camps in Mexico where thousands now live in legal and humanitarian limbo. They don’t know if they should return to their likely deaths in their places of origin or remain in suspension without support on the border indefinitely.

Outraged, we anguish that 666 migrant children may never see their parents again, after our national policy deliberately separated them at the border.

We Rely on “The Other”

COVID-19 shows us how far we have fallen from a fair immigration policy. Our nation can prosper only if we keep everyone safe and healthy. America needs effective immigration policy for economic and social progress.

Immigrants bring skills, labor, entrepreneurship and ideas. Money they contribute to our economy adds to our tax base, raising our standard of living. They fill jobs that Americans can’t or won’t do. Their customs and culture enrich the diversity that makes our country dynamic and exciting. Our national policy must match this reality.

Look deeper. Find your brother, your sister in “the other.” God is in everyone. Is that really unexpected?