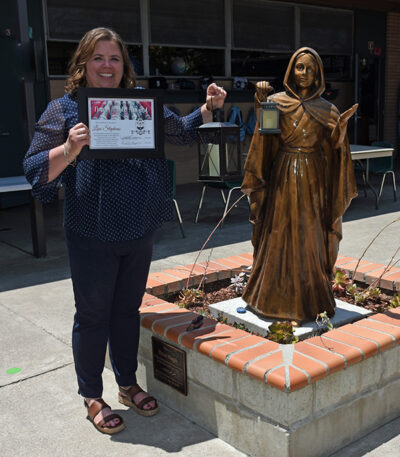 On June 3, following the graduation baccalaureate and student honors ceremony, Principal Joe Ciccoianni announced this year’s Nano Nagle Award recipient. A tradition at the school since 2009, one teacher each year has been honored for exemplifying the charisms of Nano Nagle, foundress of the Sisters of the Presentation of the Blessed Virgin Mary, who established St. Norbert Catholic School in 1965.

The process of identifying this teacher involved review of redacted student essays by a panel of judges. With over 100 essays submitted each year, this is not an easy task. In the words of one judge, “This was one of the hardest things I have done in a long time. The students truly love their teachers.” In fact, this year, every teacher was nominated, making it clear that Nano’s spirit is an integral part of the SNCS culture.

The students are asked to identify the ways in which the teacher of their choice exemplifies a trait of Nano’s. This year, it was the virtue of charity. Student essays began with defining the virtue of charity, followed by two examples of the way Nano lived this virtue, and a description of an occasion when the teacher acted so charitably it resembled Nano’s charity. This year’s awardee, Mrs. Lisa Stephens, the Religion and Language Arts teacher and herself an alumna of St. Norbert, was nominated from a range of grade levels. Among the many validating statements students wrote: “Mrs. Stephens will give her time and effort for any person who is struggling, not just in her class but with their family as well.” “She offers to drive the supplies that distance learners need for her class.” “She will even try to help us with other subjects that she doesn’t teach.” “I had a very serious problem and told the priest. He told me to find a trusted adult and talk to them about it. Mrs. Stephens has always shown kindness towards her students, she was the first person I thought of. She helped me through it. Without her, I don’t know where I would be today.”

In recognition of this award, Mr. Ciccoianni presented a check, lantern and certificate. The lantern is a tangible symbol of Nano Nagle and her work among the poor of Cork, Ireland where she would teach the children all day, in defiance of the English Penal Laws, and venture out in the dark of night to minister to the sick. Hence, she became known as “the lady of the lantern.” Clearly, through the work of teachers like Mrs. Stephens, her light still shines.