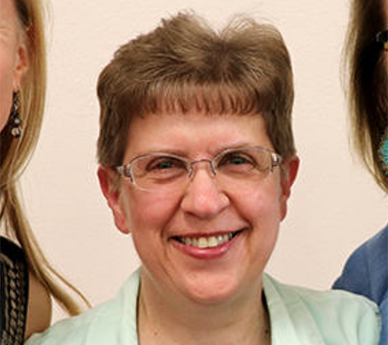 2017 WORLD REFUGEE DAY: HISTORY AND HOW WE OBSERVED IN SIOUX FALLS
by Sister Pegge Boehm

On December 4, 2000, the United Nations General Assembly decided that, beginning in 2001, June 20 would be celebrated as World Refugee Day. In this resolution, the general assembly noted that 2001 marked the 50th anniversary of the 1951 convention relations to the status of refugees. Events throughout the world take place on June 20 to draw the public’s attention to the millions of refugees worldwide who have been forced to flee their homes due to persecution, conflict and violence in all its forms. The world is experiencing the largest forced migration crisis since World War II with more than 65 million people forcibly displaced from their homes, including 21 million refugees worldwide.

ORIGIN OF THE WORD “REFUGEE”
Its root word came from the Latin, refugium, which means literally, “shelter,” and figuratively, “sanctuary.” Refugium came from the verb refugere (to run away or to escape). However, the first use of the word, “refugee”, came directly from the French word refugie with a very specific meaning: It referred to Protestants who fled France following the revocation in 1685 of the Edict of Nantes, the law that granted religious liberty and civil rights to the Protestant Huguenots for nearly a century. Over 400,000 French Protestants left France in the following years, many to Protestant England. A refugee is a person who has been forced to leave their country in order to escape war, persecution, or natural disaster.

WHO IS A REFUGEE?
A refugee is legally defined as a person who is outside his or her country nationality and is unable to return due to a well-founded fear of persecution because of his or her race, religion, nationality and political opinion.

SCRIPTURAL ROOTS
As soon as we think the “other” is a refugee, we are reminded that we are all refugees on the journey of life. The Old Testament reminds all of us to journey our hearts to God: “God is our refuge and strength.” Psalm 46:1 The New Testament goes one step further to invite God’s people to reach out and welcome the refugee, the stranger, the thirsty, and the hungry (Matthew 25:35).

REFUGEES IN SOUTH DAKOTA
As early as 1948, Lutheran Social Services, LSS, began resettlement services to displaced people from Europe following World War II. 395 individuals were resettled in Sioux Falls and 44 in Huron in 2016. This is less than 1% of all refugees resettled in the United States. 65% of cases involved family reunification. 40% of arrivals were children. As a matter of fact, 85% of all refugees in South Dakota are self-sufficient by 8 months. Current refugee populations in South Dakota include: Burma, Bhutan, Ethiopia, Iraq, the Congo, Somalia, Sudan as well as a variety of other countries.

2017 WORLD REFUGEE IN SIOUX FALLS: SIMULATION OF A REFUGEE CAMP
This year’s WRD theme is: WE STAND TOGETHER WITH REFUGEES. The planning committee asked themselves, how can we provide an experience that replicates in a small and humble way, what it might be like to live in a refugee camp, a place where families might live for decades before they are resettled? The planning committee was a diverse group themselves – Lutheran Social Services, Presentation Sisters’ Hispanic Ministry – Caminando Juntos, Multi-Cultural Center of Sioux Falls, Pax Christi Southeastern SD, and the UN Refugee Congress represented by Clara Hart the South Dakota delegate and board chair of that Congress. The United Nations Human Rights Office of the High Commissioner (UNHCR) provided T-Shirts worn by the tent volunteers, a cup used in refugee camps and other materials. Mogadishu General Store of Sioux Falls contributed the food items used at the Refugee Camp Distribution Center tent. The United States Conference of Catholic Bishops’ Office of Migration and Refugee Services provided a tool kit for organizing a community event.

The success of the event was due to the passion and commitment of each member on the planning committee. Presentation Sister Pegge Boehm, PBVM said, “a strong partnership was created amongst the planning committee. There was a blessing in the process!” This kind of partnership serves as a model of collaboration that is needed in our world today. We are many parts of one body, and we all belong to each other. (Romans 12:5)

Over 250 people came out during their lunch hour on June 20 to the new Lutheran Social Services location in Sioux Falls, where the event was hosted. When a person came to the simulated refugee camp, they began at the border crossing tent, were given an officially stamped passport, and asked to name a country from which they were coming. At that point, they took on a new identity. They were directed to the second tent, refugee distribution center, where they saw large bags of rations that would be typical in a refugee camp. Clara Hart, one of the organizers, a refugee herself, will never forget the metal cup she used when she fled from Mozambique. She said that they used that cup for everything! She had tears in her eyes when she recalled her own experience in the camp. At the third tent, a refugee woman sat and shared her story while others sat around her in a tent that looked much like a tent in a refugee camp. The fourth tent represented the visa center, where begins the long and arduous vetting process before resettlement in a hosting country. Someone was staffed at that table discussing that process and welcoming questions. The fifth tent, orientation to the country of resettlement, was an opportunity for non-refugees to hear just how difficult it would be to have to live in a strange country – new language, new culture, new customs, and harsh winters! The sixth and final tent in the simulation of the refugee experience was the ultimate dream of any refugee – departure to a country that will receive them – and in this case, the U.S. Each person had their passport stamped, and symbolically at that time, proceeded to the new office of Lutheran Social Services where tours and refreshments were provided to celebrate their new home! Still others visited a food truck that was parked in the LSS lot. 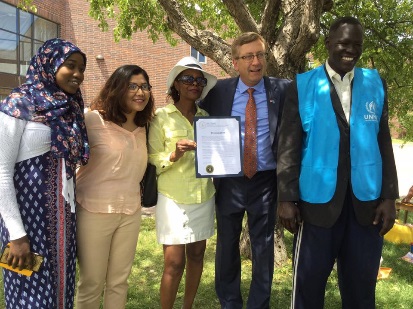 City of Sioux Falls Mayor Mike Huether proclaimed June 20, 2017, as World Refugee Day in Sioux Falls, South Dakota, emphasizing these words on the proclamation: “Sioux Falls recognizes refugees for the richness and diversity they bring to our community.”

Organizers were delighted with the turnout. Plans for World Refugee Day 2018 begin today! World Refugee Day is not just one day in the year. As long as there is a refugee, there is a reason to remember them. We need each other. We need their witness of patience, courage, and humility. They need our love and hospitality. Together we form a world of mutual love and respect.