Catholic Sisters from the Upper Mississippi River Valley are calling on citizens, President Barack Obama and local, state and federal politicians to work together to welcome refugees during a public awareness campaign to make sure potential candidates and voters remember this critical issue when they head to the polls in November. The Sisters of the Presentation of Dubuque are among 10 of the religious congregations spearheading this campaign.

Dubuque Presentation Sister Joy Peterson states, “Pope Francis has declared 2016 a ‘Year of Mercy,’ urging us to open our hearts to the stranger and the homeless because this is the way of faith. We believe that offering hospitality to refugees is a moral and faith response to the suffering of our sisters and brothers. Fifty-eight million people are displaced worldwide. We cannot turn our backs to the enormity of this pain and misery.”

Sisters are placing billboards urging communities to welcome refugees in the Quad Cities, Des Moines, Dubuque and Clinton, Iowa; Kieler and Madison, Wisconsin; and Omaha, Nebraska. The billboard’s message, “I was a stranger a refugee and you welcomed me” will remain posted through June and July. The message, based on the words of Jesus, is taken from the Gospel of Matthew. On June 20, a prayer service near the Dubuque billboard site took place with over 100 people in attendance. 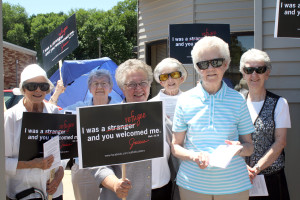 Sisters are also reaching out directly to local, state and federal politicians with postcards that ask them to “speak out against fear-mongering and inflammatory rhetoric about refugees,” and state that the sender opposes “any legislation that would block the resettlement of refugees of any nationality or religion in the United States of America.”

“We declare ourselves welcoming communities in affirmation of our Catholic tradition that holds sacred the dignity of each person,” comments Sister Joy, “and we invite other communities and people of faith to join us in becoming refugee welcoming communities through prayer, reflection, education and action. Failure on the part of the federal government to welcome refugees has resulted in states passing legislation that is punitive and harmful to human rights.”