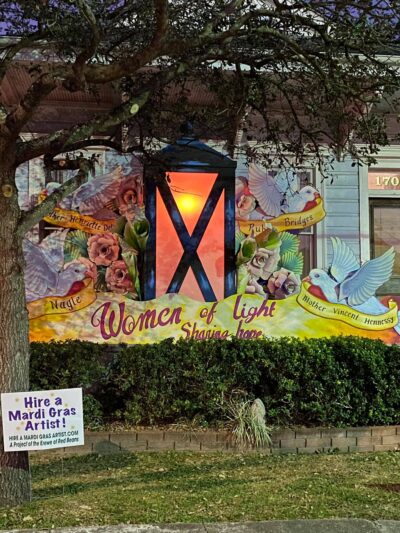 With no Mardi Gras parades this year, New Orleans transformed houses into ‘floats’ in an effort to support local artists and suppliers out of work by COVID-19. Dubuque Presentation Sisters Mary Lou Specha and Julie Marsh turned their house into a hope-themed house float called “Women of Light…Sharing Hope”! We share the following Clarion Heraldarticle with you on how Sisters Mary Lou and Julie are lighting up their neighborhood. 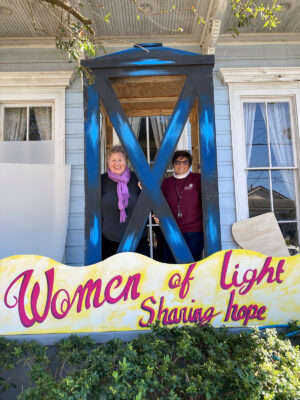 Venerable Nano Nagle – the foundress of the Sisters of the Presentation of the Blessed Virgin Mary who famously defied 18th-century politics to serve the poor of Cork, Ireland – would have relished the sight: A large painted figure of the Irishwoman leads her very own “house float” emblazoned with the theme “Women of Light: Sharing Hope.”

The inspirational tableau is the latest installment in New Orleans’ ongoing “Yardi Gras” phenomenon that’s turning the city into one huge stationary parade.

Located at the Central City home of Presentation Sisters Julie Marsh and Mary Lou Specha, the spectacular house float honors 15 women of various ages and races – both living and deceased – whose lives of service and achievement broke down barriers and continue to inspire a world hungry for hope.

“It looks so sophisticated and it looks fun. That’s what we were aiming for,” said Sister Julie, marveling at the artistry unfolding Jan. 29 as a team of professional float builders deployed by the Krewe of Red Beans turned her modest shotgun home into a traffic-stopping work of educational art.

“The world seemed so dark – everywhere you looked there was a darkness and almost a hopelessness,” recalled Sister Julie of the first 10 months of the COVID-19 pandemic.

That gloom was followed by the sudden stroke of genius from the Krewe of Red Beans: Why not ask New Orleanians to keep out-of-work parade artists employed – and resuscitate Mardi Gras 2021 – by paying those artists to turn their homes into floats?

“We were trying to find something that would bring the liveliness and the joy of the Carnival season back with that whole symbolism of light,” Sister Julie said. “And what better person to do that than our foundress!” 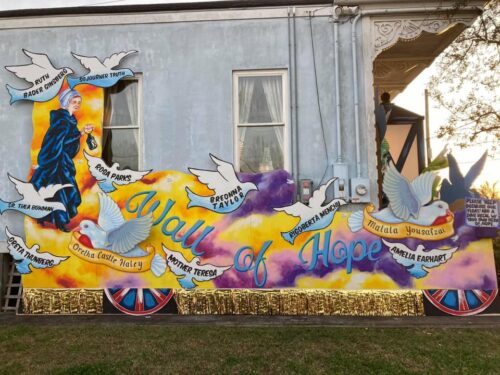 Standing out amid the dozens of pieces of exquisitely painted plywood and 3-D flowers is a 10-foot lantern on the home’s front porch on South Saratoga Street. The lantern sculpture pays homage to Nano, who was known in 18th-century Cork as the “Lady with the Lantern” due to her secret nighttime street ministry of offering the poor education, food and medicine during a time most Irish were denied pathways out of poverty by the ruling British government. Nano, who died of tuberculosis in 1784 at age 66, was declared venerable by Pope Francis in 2013.

Three other women are honored on the house float’s porch side: Mother Vincent Hennessy, the Irish-born sister who established the first North American community of Presentation Sisters in Dubuque, Iowa, in 1875; Venerable Mother Henriette Delille, foundress of the Sisters of the Holy Family in New Orleans – the country’s first community of Black religious sisters – in 1836 and who educated and nursed the city’s enslaved and other persons of color; and Ruby Bridges, the kindergartner who in 1959 became the first African-American child to desegregate an all-white public elementary school in New Orleans.

Doves of peace fly against ‘Wall of Hope’

Thanks to the empty lot next door, the side elevation of the sisters’ home is visible from the street and provided additional “canvas space” to the house float’s chief designer, Caroline Thomas.

Thomas, who in non-pandemic years is employed by Royal Artists as a float-maker for the Krewe of Rex, used this longer side of the house to depict a traditional “crowd’s view” of a Carnival float. In Thomas’ design scheme, the figure of Nano stands in the queen’s position, dressed in a midnight-blue cape and holding aloft a smaller lantern than the one out front.

Doves of peace, flying against a backdrop of yellow, orange and purple clouds, form the float’s “Wall of Hope” and present the names of other women who brought light to the world in their own unique ways:

“We all know women do so much for justice, but we are not familiar with some of their names,” Sister Mary Lou said. “(The float’s honorees) are all people who lived through very difficult times but were somehow able to overcome disparities.”

The desire to participate in the Krewe of Red Beans’ house float endeavor came to Sister Julie late last year, after she read about the krewe’s appeal to residents to assist float builders who had been temporarily laid off following the cancellation of live parades.

“We were seeing how the pandemic was causing more and more unemployment, and we thought, ‘What can we do? We don’t want to see more homelessness,’” Sister Julie said. Given the green light to proceed with their plan and armed with a generous seed donation from their Iowa motherhouse, Sisters Julie and Mary Lou launched a Go Fund Me page, ultimately exceeding their goal of $10,000 – the cost of having a house float designed and installed by a team of professional artists and carpenters.

To add a special element of interaction to their house float, Sisters Julie and Mary Lou are inviting visitors to write the name of their own personal “Hero of Hope” on a dove-shaped sticker and leave it on the Wall of Hope.

“I’m going to put my grandma on it!” Sister Mary Lou said. “Even though she didn’t make the (float’s official) ‘Wall of Hope,’ she made the wall in my heart!”

The sisters are hoping their float’s inclusion of five world-changing women religious, coupled with the fact that contemporary religious sisters participated in such a fun, worthy and high-profile project, will increase the public’s awareness of the merits of religious life. Coincidentally, National Vocation Awareness Week is held annually in January, and on Feb. 20, religious brothers and sisters from across the Archdiocese of New Orleans will gather at St. Rita Church in New Orleans for their annual Mass celebrating consecrated life.

“Religious life is alive and well in our country and in our city. There are still young sisters out there,” Sister Julie said.

Another hoped-for outcome of the house-float “buzz” is acquainting locals with the Presentation Sisters’ two main outreach efforts in the Archdiocese of New Orleans, both located in Central City and which focus on helping the homeless gain independence: Hotel Hope, which offers temporary, hotel-style shelter to homeless mothers and their children as they work toward employment and permanent housing; and Lantern Light Ministry, which provides an array of daytime services at the Rebuild Center, located on the Tulane Avenue grounds of St. Joseph Church. Lantern Light, which sparked the Rebuild Center collaborative that now includes Father Harry Tompson Center, Depaul USA and St. Joseph Church, began after Hurricane Katrina as a small feeding ministry called “Feed Jesus.” Lantern Light has since expanded its services to include weekday breakfast and lunch, laundry facilities, a mail center and ID services.

“We have people all over the country watching (the house float effort) now – from Iowa and Chicago and Florida and Ohio – so, we just want to spread the wealth, the knowledge and, basically, have some fun!” said Sister Mary Lou, crediting Nano for planting the seeds of the house float, with its giant lantern that emits an amber glow at night.

“Nano Nagle always had a spirit of vitality – I always say she is the reason I became a Presentation Sister,” Sister Mary Lou said. “If you meet Presentations from all over the world, you realize that they all share that same deep joy for life. I think that’s what she put in our heart – that joy and that deep passion for service.”

The sisters’ house float is located at 1706 South Saratoga St. In addition to Caroline Thomas, the float-building team included artists Lauren Barron, Demi Francois, Daniel Fuselier and Mark Perelli. The Krewe of Red Beans will leave the installment in place for a week or two after Ash Wednesday so more people can experience its messages of hope. The Krewe plans to hold a charity auction of float components at a future date.