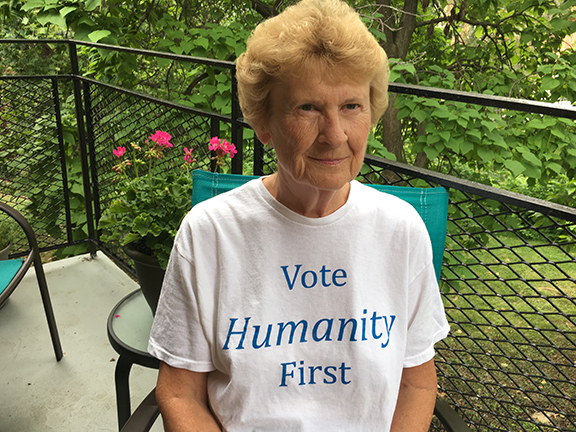 Participation in public life is a privilege that must not be squandered. Citizenship brings with it the right and the responsibility to be involved in politics and to vote. We are all called by our faith to educate ourselves on critical issues from a values perspective – top of which is respecting the dignity of all, with special attention to the most vulnerable among us. This article focuses on our call to engagement as citizens, past and present obstacles to voting, remedies for enhancing voter turnout and proactive ways to influence outcomes.

The statement “Vote Humanity First” is unequivocal. The privilege of voting carries a serious moral responsibility that calls us to cast votes that respect the dignity of all.

The U.S. Catholic Bishops urge a political engagement shaped by the moral convictions of well-formed consciences that are focused on the dignity of every human being, the pursuit of the common good and the protection of the weak and the vulnerable. In Rejoice and Be Glad, Pope Francis talks about protecting the unborn and says, “Equally sacred, however, are the lives of the poor, those already born, the destitute, the abandoned and the underprivileged, the vulnerable infirm and elderly exposed to covert euthanasia, the victims of human trafficking, new forms of slavery and every form of rejection.”

In a representative democracy, we give enormous power to elected officials to make decisions that impact the lives of all. Many laws consistent with furthering the common good and respecting human dignity have been enacted throughout our history. Sadly, over time systemic racism, systemic poverty, ecological devastation and militarism have also become imbedded in our system due to laws that legislators have passed … or have neglected to pass.

The 1944 post-WWII GI Bill, for example, gave many returning veterans access to education and housing, but it was structured in a way that shut the door to many of the 1.2 million Black veterans unable to access low-cost mortgages, loans and money for college tuition. Vestiges of that law can still be seen in ‘redlining’ which results in families of color disproportionately being relegated to poorer parts of cities and unable to pass home-related wealth down to their children. Today, data on racial and economic disparities in policing, healthcare, financing, education, housing and employment expose the flaws built into our systems and institutions.

Responsible citizens educate themselves on current issues and learn candidates’ stances on those issues. To make informed choices, consult with non-partisan entities like the League of Women Voters and Vote Smart, listen to telecast debates, read trusted news sources and engage in conversations with others, especially those most impacted by the issues.

While most of us assume our right to vote, not everyone can. Voter suppression has left a long and sordid stain on our democracy. Despite the 1870 passage of the 15th amendment prohibiting state and local governments from denying citizens the right to vote based on a race, color or previous servitude, practices like codified literacy tests, poll taxes and direct threats of violence persisted.

In 1964 the Freedom Summer push for voter registration in Mississippi was met with resistance and violence. Martin Luther King, Jr., Malcolm X, John Lewis and others organized a series of marches from Selma to Montgomery advocating for voting rights. On March 7, 1965, white advocates joined with Black activists for a peaceful march across the Edmund Pettus Bridge only to be violently assaulted by state troopers on what is known as “Bloody Sunday.” Sister Richelle Friedman was honored to talk with Representative Lewis about that event during which he shared his deep gratitude for Catholic sisters who cared for the injured. In the aftermath, pressure built and President Johnson oversaw passage of the Voting Rights Act of 1965.

One provision of the Act required jurisdictions with a history of voter suppression to seek preclearance from the federal government before changing voting laws, but in a pivotal 5-4 decision the Supreme Court declared the law unconstitutional. Since that decision, 21 states, mostly southern, have enacted restrictive voting laws that increase voting requirements and create barriers to voting, overwhelmingly impacting communities of color.

Building on the legacy of Dr. King, the Poor People’s Campaign, a faith-driven popular movement, focuses on giving voice to those who have been excluded from the electoral process and disproportionately suffer from systemic poverty – people of color, women and children. Co-chair, Reverend Dr. William Barber, calls the right to vote “a matter of life or death.”

Over concerns that the COVID-19 pandemic could suppress voter turnout in Iowa’s June primary, Republican Secretary of State Paul Pate sent a postcard with information on how to request an absentee ballot to all registered voters. The 520,000 votes cast shattered the previous record of 450,000 cast in 1994. Rather than rejoicing, the legislature challenged the secretary’s ability to repeat that process. In a compromise, a bipartisan panel was established to determine if a similar process could occur for the November election. The panel unanimously agreed that it could. Iowa voters should have received the postcard. For others, see Voter.org. Those who vote by mail are strongly encouraged to request their ballots early and return them as soon as possible. In-person voters are also encouraged to vote as early as allowed in their state.

Responsible citizenship demands that we exercise our responsibility to vote based on an informed conscience. In his September 2015 address to the United States Congress, Pope Francis said, “All political activity must serve and promote the good of the human person and be based on respect for his or her dignity.” We are called to vote humanity first.