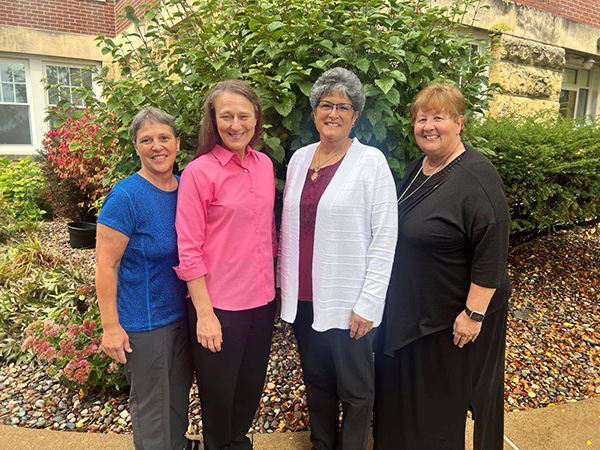 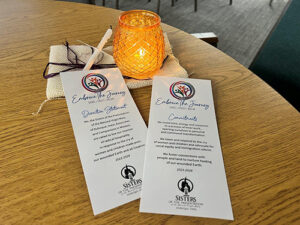 For over a year and a half, sisters, associates and the Chapter Preparation Committee were in dialogue preparing for their General Chapter held on October 7-12, 2022. The theme, Embrace the Journey: Dare, Trust, Begin, described the task at hand. In a culture hungry for instant answers, they opted to live into the wisdom of the questions: How has the mission and charism informed our actions? Where do we hear the cries of people made poor? What is our response to the summons from Pope Francis to care for Earth, our shared home?

What is a General Chapter?
For Dubuque Presentation Sisters, a General Chapter is a time to take stock of the current state of the world. It is a formal meeting scheduled every five years, consisting of two distinct parts: Chapter of Affairs and Chapter of Elections.

The Chapter of Affairs began with a meaningful opening prayer that invited those present to remember sisters and associates who joined the company of the angels and saints during the last five years.

Throughout their days together, sisters and associates participated in prayer experiences enriched by music, scripture, poetry and contemplative silence. The rich threads of these shared prayers were a source of strength and unity.

After months of study that included guest speakers; several Zoom meetings; many opportunities for dialogue; suggested readings; honest conversations and prayerful discernment, sisters and associates continued the conversation. They were guided by their charism of radical hospitality and the founding vision of their foundress Nano Nagle. Her response to what needs doing was clearly in defiance of the 18th century penal laws in Ireland. Nevertheless, with courage in both hands, she founded schools and later a community of women religious.

The leadership team gave a report of the past five years that led participants in a process that oozed with creativity. Ideas from table conversations were captured in writing on circle centerpieces and shared with the entire group. 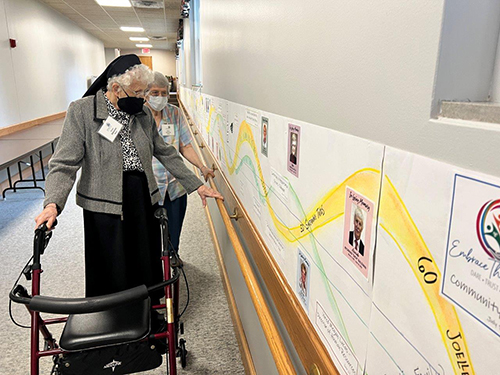 A 50-foot timeline, a picture of the journey of the last five years, served as an artistic complement to their report. It highlighted significant events, jubilee celebrations, pictures of associates and sisters now dancing with the angels and more. All these were displayed amid intersecting waves of pastel yellows and greens.

Chapter facilitator, Sister Mary Catherine Redmond, Presentation sister from New York, skillfully led the group in conversations and discernment that connected the charism of radical hospitality with the reality of so many sisters and brothers in the world who are barely eking out a living. After attentive listening and reflection, the major themes, ideas and concerns were then handed off to a writing committee who were tasked with expressing the focus and direction of the group’s energy as envisioned for the next five years. Their work formulating a direction statement was met with unanimous approval.

What is the process for the Chapter of Elections?
The second part of the chapter, the Chapter of Elections, involved only the sisters. It threaded together conversations from pre-chapter meetings and discussions. Building on a pre-chapter process that surfaced names of sisters for the ministry of leadership, the delegates participated in a method of discerning names for this ministry. This process was followed by a day of retreat.

After the retreat day, with the prayerful support of all assembled and those at a distance, delegates moved to Sacred Heart Chapel to continue their discernment of the needs of the congregation and the names of sisters who remained open to the ministry of leadership. The Chapter of Elections concluded with the prayerful election of the leadership team for 2023-2028.

Sister Carmen Hernandez was re-elected as president and Sister Rita Menart was re-elected as vice-president. Sisters Mary Lou Specha and Joetta Venneman were newly-elected as members of the leadership team to serve as councilors. The new team was warmly embraced and blessed by the sisters. Their term of service will begin in the spring of 2023.

Calm, peaceful, prayerful, reverent and contemplative were words used to describe the entire chapter experience. Conversations provided numerous opportunities for the sisters to share in meaningful ways, which strengthened their bonds of unity as they anticipate their journey into the future.

In the closing ritual, sisters anointed each other for the journey they promised to begin. With the entire chapter completed, sisters and associates embrace their shared journey into the future, a journey that calls them to dare, trust and begin. 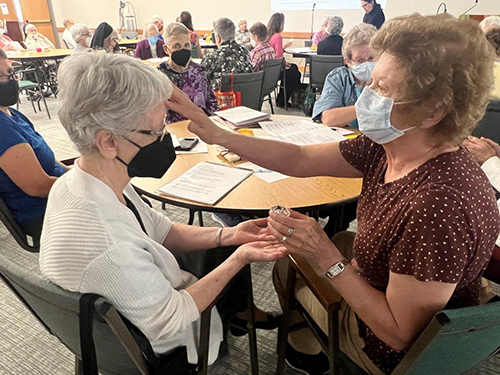 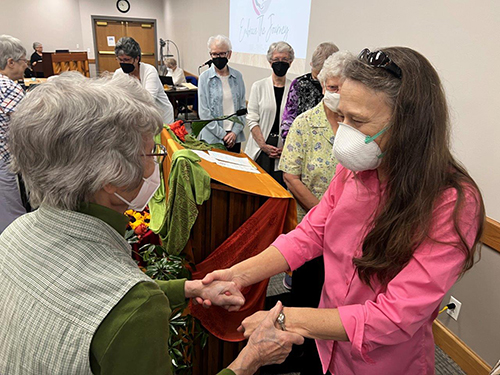 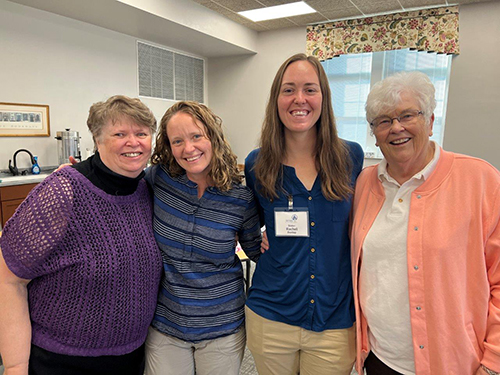 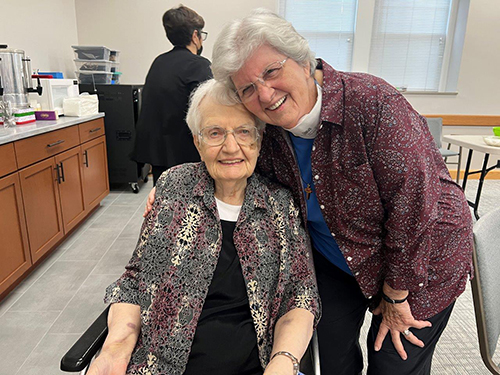