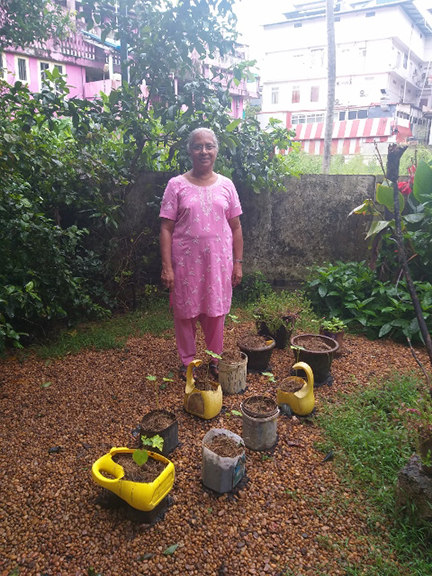 Pictured above: Sister Paula Schwendinger works with other volunteers in preparing packages of diapers for traveling migrants.

Poet Warsan Shire, a Kenya-born Somali woman, now British citizen, writes, “No one leaves home unless home is the mouth of a shark. You only run for the border when you see the whole city running as well, your neighbors running faster than you. No one leaves home unless home chases you, fire under feet, hot blood in your belly … it’s not something you ever thought of doing until the blade burnt threats into your neck … You have to understand that no one puts their children in a boat unless the water is safer than the land, no one burns their palms under trains beneath carriages, no one spends days and nights in the stomach of a truck, feeding on newspaper, unless the miles traveled mean something more than journey. No one crawls under fences, no one wants to be beaten, pitied …”

Early in 2021, the suffering of thousands of migrants at the southern U.S. border resulted in a request from Catholic Charities to communities of women religious to help support efforts to address the horrific situation. As thousands of unaccompanied children crossed the border there was a special need for volunteers who speak Spanish. Many border centers, including Catholic Charities in Laredo, Texas, offered to host sisters and associates able to provide service by meeting immigrants who had been freed from U.S. Immigration and were on their way to sponsoring relatives and friends. After suffering from the insecurities of leaving all they have known behind, finding hospitality and warmth in the Catholic Charities Respite Center was an opportunity to regain a sense of their own dignity.

In mid-June, Sister Paula Schwendinger travelled to Laredo to offer her gifts of fluency in Spanish and a love for immigrants. Sponsored by the Sisters of the Presentation and generous donations from supporters, Sister Paula met families who had made their way to the border through South and Central America. While she was in Texas, each day she posted some of the stories she heard from families at the center. Some of them are offered here.

Day 1: Yesterday I spent several hours talking to the migrant families as they were released from detention. Immigration officers escort them to be sure they are not robbed or taken for ransom while they wait for the Catholic Charities bus to take them to the Respite Center. Before they arrive at the bus, they have been tested for COVID-19 and if they test positive, they are taken to another center to quarantine.

I met one family from Central Mexico who owned a food store. One day the drug cartel arrived demanding an exorbitant amount of money or they would take their children, ages 10, six and five. The family immediately got on a bus with just the clothes on their back and rode 12 hours to the border town of Nuevo Leon, Mexico, seeking asylum. After being in detention for four months, they were freed. They had a sponsor in Los Angeles, but had to wait for money to be wired for bus tickets. When I left them yesterday, the father and son were going to the bus station with someone from Catholic Charities to purchase the tickets. I may not see them again but I assured them of prayers for their journey.

Day 7: Gisela, 55, is Cuban. She was an accountant and her husband was an ironworker. They left Cuba because they had spoken out against the government, putting their lives at risk. They travelled by plane, bus and on foot for two months and 10 days to get to the border. You may wish to find a map to trace their journey: Cuba – Guyana – Brazil – Perú – Ecuador – Colombia – Panamá – Costa Rica – Nicaragua – Honduras – Guatemala – México.

After the long journey together, the couple was separated at the border. Gisela spent four days in detention and was released. Her husband had been released a day earlier and was waiting for her with cousins in San Antonio (two-hour bus ride). They then will fly to Miami, where they have two sons, ages 32 and 30, who also arrived as migrants and are awaiting their court date. Gisela was very traumatized by the whole experience, and I was grateful that I could be a listening, peaceful presence in the midst of the chaos.

Day 10: Today, I spent time with a young couple from the Congo. It was difficult communicating since the wife spoke no Spanish and the husband interspersed Spanish with Portuguese. The husband left the Congo 11 years ago in search of work in Brazil. The language he spoke in the Congo was French and he learned Portuguese in Brazil. His wife joined him in Brazil five years ago. They have darling four-year-old twins who speak only Portuguese, so are unable to communicate with their French-speaking grandparents in the Congo.

The husband worked for a construction company and delivered cement, wood and other materials. The company recently started hiding drugs on his truck. When he realized this, he expressed that he did not want to be involved in anything illegal. They threatened him and even went to his house when he was not there and threatened his wife and children. They knew they had to leave.

They packed up and started their two-month journey through Peru, Ecuador, Colombia, Panama, Costa Rica, Nicaragua, Honduras, Guatemala and Mexico. The worst part of the trip was the 66-mile trek through the jungle known as the Darian Gap between Colombia and Panama. There were 40 of them traveling together, because it is too dangerous to travel with only one family or small group. The family is going to Maine, where they have relatives waiting for them.

Sister Paula Schwendinger cares for the youngest migrant allowing her mother to shower.

Day 14: A young couple from Honduras was traveling with their two-year-old daughter. In Honduras, they sold tortillas and he did mechanical work as well. He was also a catechist and was happy to be teaching children about God.

The gangs threatened him often, but one day they fired a shot as he ran from them and, luckily, the bullet went through his leg. On another day, he was driving his motorbike when a group of gang members stopped him. They surrounded him, pulled out a machete and threatened to cut off his head. He gave them all his money and his phone, and fortunately, they spared his life.

After those experiences, the couple knew they had to leave. They could not make enough to live. If they paid their utility bills, which kept increasing, they could not pay for food. They had other family expenses, including helping with cancer treatments for the wife’s mother.

The young family left Honduras in June by bus. They went to the border of Guatemala where they were robbed of their phone and most of their money. They walked and were sometimes given rides in the back of trucks to Mexico. The police in Mexico took the remainder of their money. People on the way generously shared food with them, especially when seeing their little girl.

When they reached the Rio Grande River family members in Oklahoma had to wire money to the smugglers who were transporting them across. Even though these trips only take 10 minutes in an inflatable raft, they need to be made at night so that migrants are not seen.

When Immigration encountered this family, they spent one day in the “freezer” detention center, so-called because it is very cold there, and families are only given Mylar aluminum covers. All other blankets, even for their children, are taken away from them.

The family then spent three more days in another detention place. They will be glad to arrive in Oklahoma after almost three weeks of traveling.

Catholic Social Teaching is grounded in honoring and respecting the dignity of every human person. In his annual message for the 2021 World Day of Migrants and Refugees, Pope Francis chose the title “Towards an Ever Wider ‘We.’” The stories Sister Paula shares invite readers to recognize that the hungers of every family for a safe home and honorable work are universal. The “we” in humanity that Pope Francis speaks to reminds readers to acknowledge “the truth that we are all in the same boat and are called to work together … to become a single “we,” encompassing all of humanity.”