The theme of the April 19 retreat, “God’s Relentless Love” was based on both the lyrics of a song called ‘Reckless Love’ as well as the Parable of the Lost Sheep from Luke’s Gospel (Lk 15:3-7). Mr. Sullivan, who was one of the adult leaders along with Mrs. Bowen and Sister Mary Kelly, former principal of the school, said, “The message that day was that God, in his greatness can’t help but be relentless in his love. He is infinitely relentless in searching for us and in calling us to something better than where we are now.”

The lyrics of the song reverberated throughout the campus as the entire school was led by Damien freshman T.J. Rodriguez and St. Lucy’s  freshman, Lily Torres. T. J. was on guitar and Lily sang beautifully from the heart, “Before I spoke a word, You were​singing over me. You have been so, so good to me. Before I took a breath, You breathed Your life in me. You have been so, so kind to me. Oh, the overwhelming, never-ending, reckless love of God.”

The day began with a school-wide mass. In the Gospel and in the homily by Fr. Carlos we were reminded that, like the lost sheep in Luke’s parable, Jesus, the good shepherd, would leave the ninety-nine to go in search of the one lost sheep. After Mass the student leaders introduced the theme by performing a skit. Tristan Bato played himself in the skit as the ‘lost sheep’ figure who alienated his family and friends by terrible personal choices. After hitting rock bottom, he is led by his guardian angel to come face to face with God (played by Avishka Silva). God reminds him of all of the blessings that he was given in his life and this generates in Tristan a deep sense of gratitude for God’s relentless love in his own life. 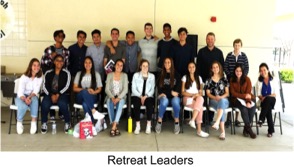 These leaders went in pairs to different classrooms to share God’s word, their own life experiences and a fun activity to reinforce the message. The acticity was completely student led. These high school students are so gifted and so willing to be a witness for Christ. Since the message was coming from high schoolers who were once literally in their seats, in the classes, in their school as alumni of St. Joseph it was very impactful and meaningful. The various break out session covered prayer and sacraments, sin and obstacles to happy relationships, bullying and gossip, servant leadership, and sanctification and sainthood.

During lunch and recess the teens had as much fun as the younger children playing basketball, volleyball, tag and kickball.