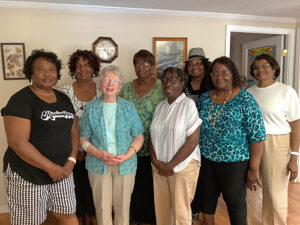 In September, 2009, we three sisters, Wiona Engel, Maura Fitzsimons, and Una Murphy (RIP), began a detailed study of areas of poverty in the Mississippi Delta, a follow up to the wish of the Presentation Sisters to begin a new mission in an area of need. We chose Shaw, a small city in Bolivar County. In our research, we discovered that Shaw was an economic, marginalized, and socially oppressed area. Yet the greatest need requested among the people was remedial education for children.  In February 2010 we began a tutoring program, with sessions geared toward children who were achieving below the state educational norm.  As time moved on, we also were engaged in outreach to the sick and the confined; the poor at our door; people and families in need; summer programs; adult literacy; health and family issues; civic matters, as well as needlework, crocheting, exercises, informative and fun outings.

After 12 years in Shaw, sadly, but with confidence in its future, we have handed our Center and ministries over to Delta Hands for Hope, a Baptist group who are interested in the education of children, the development of family life, and people on the margins. This is a great blessing, as Delta Hands for Hope will carry on our work and ideals into the future.

From the beginning, one of our greatest ministries was to live among the beautiful, faith-filled people of Shaw, especially to be there with them not only in their tragedies, but also in their triumphs. Highway 61 that connects with the outskirts of Shaw, has an inviting sign: SHAW, A SMALL TOWN WITH A BIG WELCOME. This recognition of the town is most appropriate. The people are welcoming; they made us one with themselves. They are a faith-filled people who taught us how to be grateful for our blessings. We are indebted to them, have learned much from their way of life, and are saddened to leave.  We will keep them in our hearts, knowing their strong faith will continue to carry them forward. 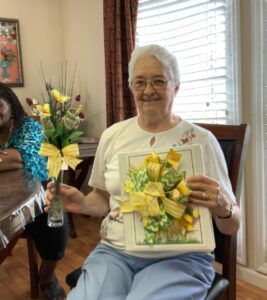 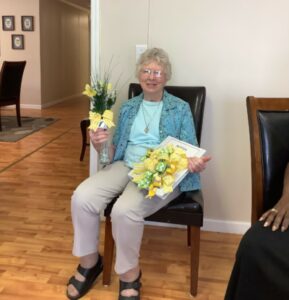 May 19, 2022 marked the end of our weekly program with our wonderful “Active Ladies of Shaw, Mississippi.”  They surprised us with a delicious dinner, including “Margaritas”!

Also was mentioned, receiving an appreciation of and respect for our beautiful world and everything God created, while also learning the importance of re-cycling and composting. We had great laughs over one thing they did not like to do, namely crocheting!!!  These are just a couple of examples of the comments about the many things we accomplished together and of the values of life we shared. 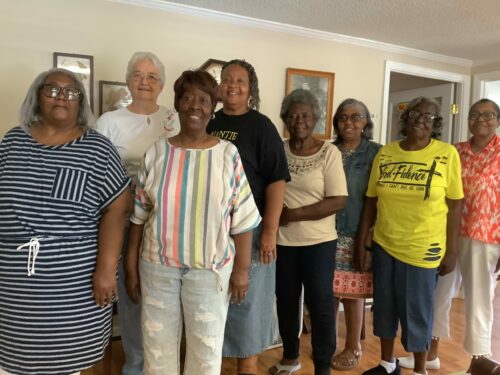 They thanked us for coming to Shaw, MS instead of other places we could have chosen to go.  We were presented with a binder of a greeting card from each lady in attendance and with a flower arrangement, made with money!  We were humbled and grateful to have had the privilege of working with and sharing life with these great ladies over the last twelve years. We left saddened that we had to go and yet, we were very grateful for our years of ministry with them. We have been truly blessed by these great ladies and they will forever be a part of our lives.