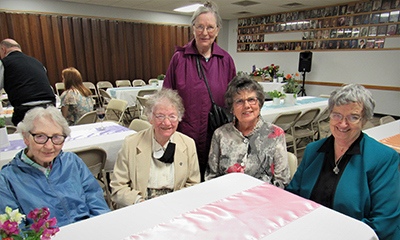 For many years the Presentation Sisters operated five hospitals in North Dakota. Sisters assigned to these facilities were involved not only in providing healthcare but also with other aspects of life in the rural communities served by the hospitals. Many life-long friendships were forged as the sisters and other dedicated persons worked side-by-side.

Linda Seim began her service in that hospital as a young registered nurse. Many patients and their families benefited directly from her skilled and compassionate care. Patients, staff and the civic community benefited from her competency in roles of clinical supervisor and hospital administrator. Linda was a stabilizing force as she saw her boys grow into men, buildings constructed, a change of name from St. Ansgar’s Hospital to FirstCare Health Center while navigating the tsunami of changes in healthcare delivery. A few years ago, the sisters presented Linda with the Nano Nagle Award for her living of the values and virtues of Nano.

Linda is most deserving of the accolades she received on Friday the 13th and Sisters Marcelline Sookov, Georgianna Sprunk and Marie Glennon were delighted to be part of the appreciative assembly as they had worked with Linda over the years. Sister Bernadette Trecker was their gracious chauffeur who deftly navigated the detours and flooded roads between Fargo and Park River.