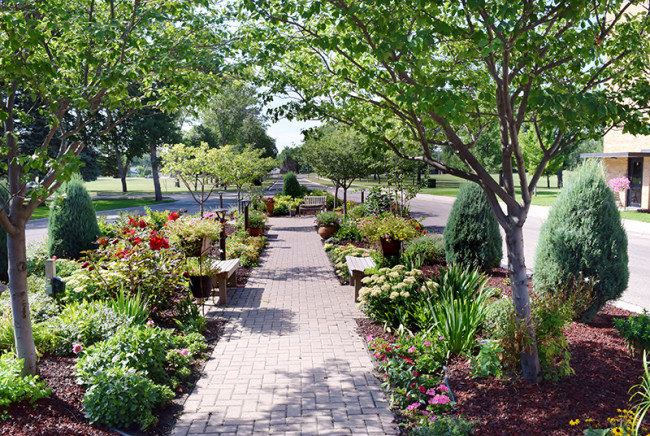 Gardens dedicated to the Blessed Virgin Mary have been a part of Catholic cultures for centuries. The first Mary garden known to be dedicated to her was one created by the Irish St. Fiacre circa the 7th century. The first account of it being actually referred to as Mary’s Garden involves a 15th century accounting record for plants purchased for “Sister Mary’s garden” by the sacristan of a priory in England. The enclosed garden is one of the most popular ancient symbols of Mary.

The Presentation Sisters of the Blessed Virgin Mary, Aberdeen, South Dakota, decided to follow in this tradition of plant-filled spaces dedicated to Mary and her many attributes in 2005. Also incorporated into the beautiful tribute to the Blessed Mother are some of the plants that were growing in previous gardens on the property. They provide a living connection with earlier times at the convent. 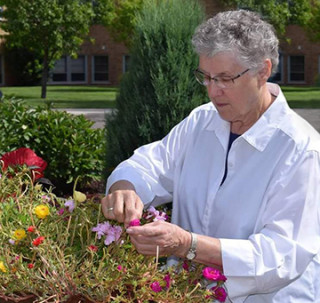 Sister Lois Ann Sargent, who has been one of the foremost caretakers of the sister’s Mary Garden since its beginning, explains, “Honoring the Blessed Mother is part of who we are, part of our heritage of being Sisters of the Presentation of the Blessed Virgin Mary.” She says this is why the implementation of a Mary Garden on the convent grounds only seemed natural.

The garden, known as Mary’s fiat, occupies the center area of the circle entry drive. Mary’s fiat reflects her willingness to give herself completely and joyfully to God. In a similar way, plants model a way of abandoning or entrusting themselves to God’s care and providence regardless of the season. Planting of flowers, bushes and trees were not only for their symbolic relationship to Mary, but also with respect for their hardiness, ease of maintenance and beauty during all seasons. The garden is accessible to all by the cross shaped, lighted path which reaches out to the main entry door and side doors. Mary’s statue earned her place high above the entrance of the convent and she lovingly overlooks her garden and all those who enter here. There is a path that leads through three distinct circular plant “rooms,” each with peaceful resting benches so that a person may pray and or contemplate while strolling through Mary’s Garden.

Some additions have been made since the first planning and planting of the Sister’s Mary Garden. They include a gift of Mother John Hughes’ original headstone given by the Fargo Presentation Sisters in honor of the Aberdeen congregation’s 125th anniversary. A new headstone was placed in Fargo to honor Mother John, the first mother superior of the Presentation Sisters in Aberdeen and, later, leader of the Fargo congregation. Another addition is a birdbath gifted to the Mary Garden by Mother Joseph Butler’s relatives who visited from Ireland in 2008. Mother Joseph was the third mother superior of the congregation beginning in 1894. More recently, the Sisters’ Mary Garden received a revival this spring and is once again flourishing in is original intended beauty to honor the Blessed Virgin Mary.