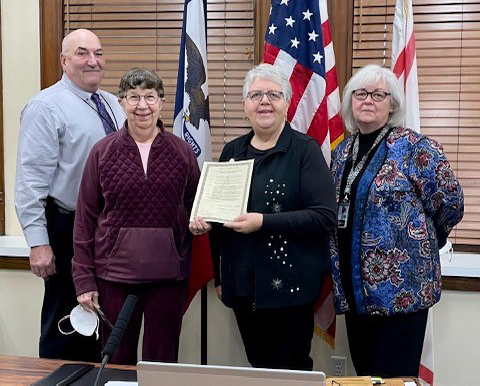 Initiated in 2014 by Catholic religious sisters and based in Dubuque, Iowa, the Tri-State Coalition Against Human Trafficking is a faith-based collaborative effort fighting human trafficking in portions of Iowa, Illinois and Wisconsin. The coalition was formed with the purpose of educating people of all ages on the signs of human trafficking. Various subcommittees focus on topics of education, advocacy, outreach and hotel/motel employee training. Even during the pandemic, the coalition has trained city bus drivers, hosted a booth at the Dubuque County Fair, posted a billboard on Highway 20 during the Major League baseball game in Dyersville, Iowa, and purchased a wrap advertisement on a city bus for one year. 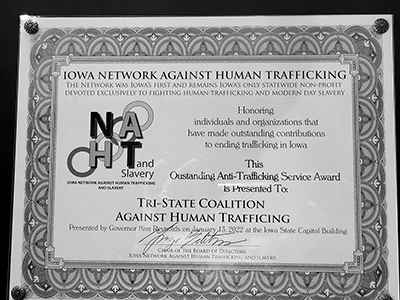 As a member of the coalition, Dubuque Presentation Sister Marilou Irons states, “I am honored to be working with and among these dedicated coalition members. We are willing to become involved in whatever aspect we can to end the horrors of human trafficking. Our collaborative efforts and connections are key components of our work to end human trafficking. We are committed to continue these efforts. Our next steps are to continue hotel/motel training and educate ourselves and others on the new IBAT initiative to end the demand for human trafficking.”

Countless volunteer hours have been dedicated to community awareness, in-school student education, hotel/motel training, influencing anti-trafficking public policy, training of rural law enforcement and advocacy for survivors. Several members have partnered with the Iowa Network in preparing resources for the training of hotel and motel employees, by working on the script for a video and preparing handouts for the employees. The coalition welcomes new members as they introduce the Iowa Businesses Against Human Trafficking (IBAT) program, designed to assist Iowa businesses in forming policies and procedures against human trafficking.

Visit www.humantraffickingiowawil.com if interested in joining the coalition’s efforts to end human trafficking.