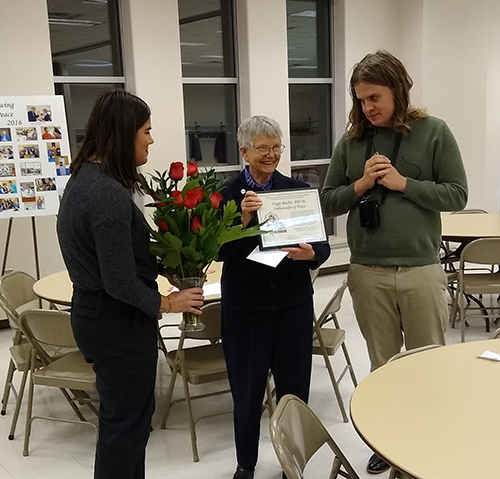 Above: Lauren and John awarding Sister Peggy Boehm the Ambassador of Peace award.

In November, Eastern South Dakota welcomed Pax Christi USA (PCUSA) staff members Lauren Bailey & John Noble as they visited Pax Christi members and chapters. During a whirlwind tour, they learned about the activities and people who have been working towards gospel nonviolence for many years. In addition, there were opportunities to connect with partners, and others who may become partners, who have been an integral part of peace and justice work in South Dakota.

A highlight of this trip was honoring Sister Pegge Boehm for her work. Pax Christi USA, an arm of the international Catholic peace movement, has, for 50 years, collaborated with people from across the country to find ways to advocate and work for a more just world. These individuals are often the local faces of Pax Christi in their region or state. Periodically, Pax Christi USA recognizes one of these individuals for the outstanding work that they do. This year, Sister Pegge was recognized for her contributions toward furthering the practice of Gospel nonviolence by being named an ‘Ambassador of Peace’ by PCUSA.

John supported the amazing work of Sister Pegge and others even though, they brushed it off as just “something that needed to be done so I/we did it”.  During the presentation, John reflected on members’ work that is often difficult, and unrecognized, but “needs to be done”. He reflected on the work of not only Siser Pegge, but the work of many members of local Pax Christi groups as well. He celebrated the “really, really courageous and risky work that I’m not ready to do”, and provided examples from Nano and other Presentation Sisters as they developed the legacy of Justice is our Work.

One aspect of Sister Pegge’s work that was highlighted in “the work that needs to be done, so we do it,” was how well she recognizes potential partners and brings others into the work. John stated that the work that we do “is never done alone” and noted how well Sister Pegge does this as “one of the reasons we wanted to honor her…we saw over and over how that work is done in community”.  John reflected on the story of Nano’s lantern, an inanimate object without those who are willing to carry it. He likened peace and justice work to the guiding light of the lantern and how people, religious women in particular, have picked up the lantern through which the light of peace and justice work is done. These individuals go out to the world to work for things like peace, racial justice, Medicaid expansion and more. “This light needs to be carried … and Sister Pegge, you are an Ambassador of Peace, not just because you carry the light but because you carry that light to your community, with your community and from your community.”