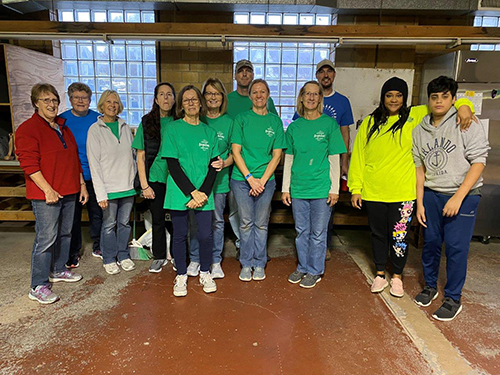 Above: The Seeing With New Eyes team pauses for a group photo with Kale Whalen, executive director of La Luz.

On Saturday, November 5, a group of 10 associates volunteered at La Luz Centro Cultural in Hampton, Iowa, as part of the Seeing With New Eyes program. This program provides an opportunity to step away from the busyness of daily life and engage in service. After carpooling to the site, the group spent time getting acquainted with one another, staff members from La Luz and local Hampton volunteers. The group then jumped right into service projects which included cleaning, organizing, gutting the attic, demolishing leftover shelving units from the building’s previous owners, hauling items out to a dumpster and relocating the food pantry within the building.

La Luz Centro Cultural, initially named La Luz Hispana, meaning “The Hispanic Light,” was initiated by the Sisters of the Presentation on March 27, 2013. The center changed its name to La Luz Centro Cultural in February 2020 to encompass all the programs and services it offers. 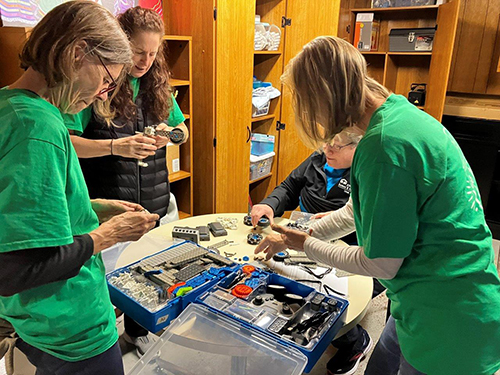 The mission of La Luz Centro Cultural is to promote cultural awareness and diversity with hospitality and supporting services for all. Their mission statement reads, “We are Latin Americans who raise up integral services for survivors of crime. We give specific cultural assistance to the Latin American population in Franklin, Wright, Cerro Gordo, Hamilton counties and areas nearby. Our services are centered around the family and accessible in Spanish, providing survivors help and information that will better their health, security and well-being in the short or long term.” Services offered include providing information about rights and options for survivors; assisting with developing a personal security plan; providing references and assistance with legal services, doctors, housing and socials; visits from lawyers; accompanying to court; interpreting; confidentiality; and support groups the third Monday of each month. La Luz also offers an after-school program for children and teens, providing homework help, art activities and access to computers, tablets and the internet.

Two participants of the Seeing With New Eyes group, associates Joann Gullickson and Darla Budden, were members of the La Luz board for several years. Both Joann and Darla were excited to return to La Luz and experience how it has changed over the years. 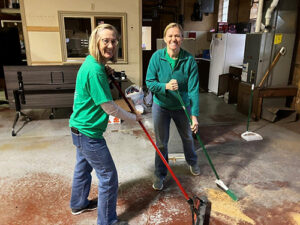 Joann shares, “It was a productive and fulfilling day for all. On our drive home, our carload reminisced about a few of the wonderful things that happened at La Luz when Sisters Carmen Hernandez and Maura McCarthy ministered there. A favorite memory was the ‘bed project.’ Sister Carmen worked with a local furniture store in the area and was able to provide 28 beds to families in the community who were previously sleeping on the floor. What a blessing for so many!”

Associate Delynn Fangman states, “I enjoyed cleaning and organizing with others at La Luz with a common goal of creating a functional place for individuals to gather and learn, and create a community.”