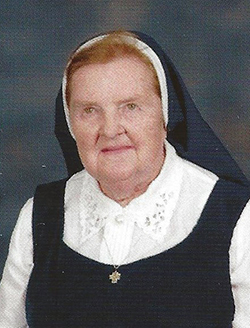 Sister Carmel O’Callaghan, who died on June 1, 2016, was born in Bandon, Co. Cork, Ireland. She was the eldest of a family of 10. Educated in Presentation Convent High School, Bandon, her teacher, Sister Cecelia Smyth, was at that time preparing to go to Texas as part of a new foundation. Sister Carmel entered Bandon Convent in 1955 with the intention of going on the mission to Texas. She arrived in San Antonio, Texas, in March 1957. She completed her bachelor’s and master’s at Incarnate Word College.

In 1957 Sister Carmel began her dedicated service of teaching at St. Gregory the Great Catholic School for 10 years. The following 10 years she taught at St. Thomas More Catholic School and continued working in the parish for an additional 15 years as director of religious education. In 1992 she was invited to become pastoral associate in St. Gregory the Great Parish until her retirement in 2011.

Sister Carmel was known for her generous spirit and great hospitality, journeying with people, being truly and sincerely involved in their good times and sad times, and a marvelous God-sent friend to everyone. It was not surprising then, that her vigil service and funeral Mass were such a testimony to her life spent selflessly for others.