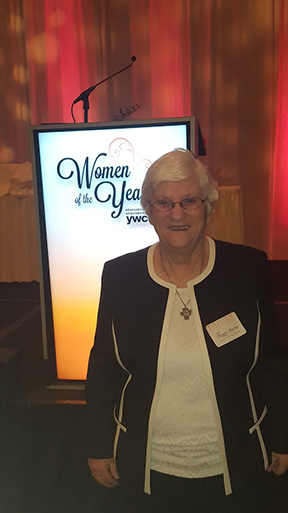 Sister Peggy Byrne was named the recipient of the 2017 YWCA Woman of the Year Lifetime Achievement Award on May 1 in Fargo, North Dakota. Since 1973, the YWCA has been shining a spotlight on exceptional women. They are leaders, mentors, visionaries, angels and heroes. The recipient of the lifetime achievement category must be at least 55 years of age or older and have demonstrated a long-term commitment to equality, empowering woman and girls, and/or eliminating racism. She exemplifies integrity and displays compassion for humanity.

Sister Peggy emigrated to the United States at the age of 16 to join the Presentation Sisters in Fargo, North Dakota. She served as a teacher and principal in the Catholic schools in the region for 27 years. Sister Peggy then answered God’s second missionary call and moved to Chimbote, Peru, to serve the poorest of poor. She came to a paternalistic country where the main focus in a woman’s life was survival. She carried the faith to the poor each day and recognized that without education, the poor would never escape poverty. She also believed that education could help young women escape from oppressive situations that kept them from opportunities for the future. When she came to Chimbote, she encountered a graduation rate from secondary school in the single digits. After 32 years of dedication, the high school drop-out rate is now in the single digits. Young women who did not have any role models are now graduating as attorneys, obstetricians, educators and engineers. Single mothers are completing vocational training and starting new businesses. And the greatest accomplishment of all is that they are independently caring for their families.

During this time, Sister Peggy was able to connect two very different cultures – the poor Hispanic culture of Chimbote, Peru, with the predominantly white wealthy culture of the United States Midwest region. The supporters of the mission secure resources and help create programs that provide an opportunity for a hand up instead of a hand out. Visitors travel and volunteer in the barrios, creating an even stronger sense of unity. They are committed in keeping the legacy of Sister Peggy Byrne and Father Jack Davis alive.

Sister Peggy was able to communicate the call to everyone to build a better world by praying and working together. Regardless of where we live or what language we speak, we are all One with our Father. We have a divine responsibility to provide hope and dignity to the least of our brothers and sisters as Sister Peggy so selflessly demonstrated.