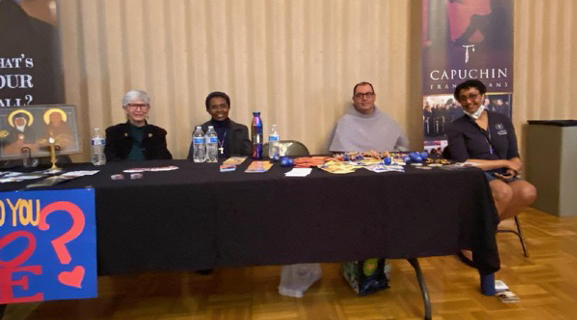 Pictured above: Sister Sharon Altendorf, left, seated at the vocation table during the Youth Spectacular.

About 500 youth (five from each parish in the Archdiocese of San Antonio) attended this session. The most impressive parts for me were the opening Mass where Archbishop Gustavo Garcia Sillers and Bishop Gary Janak concelebrated, the presentation by Sister Patricia and the collection of the views of these young people as part of the synod process.

At the opening of the Mass Archbishop Gustavo invited all to pray for peace in our world especially in Ukraine. He taught us to use sign language for the word “peace” and used it throughout the liturgy. The music was led by one of the youth leaders who sang songs I had not heard previously – and to my surprise when they later sang “Here I am Lord” the whole crowd sang out!

Following this, Sister Patricia spoke to the youth using them as volunteers to explain what the synod was about (listening, dialogue, and discernment) and encouraged them specifically to really listen to each other and especially those with opposing views. She shared quotes from Pope Francis speaking to the youth and at the end a stand-up image of Pope Francis arrived.

Youth leaders sat with their groups following a Chick-fil-A box lunch and asked the questions posed by the synod and were told that they would not be synthesized but sent directly to our bishops and then on to Rome.

We had two vocation tables – one for the priests and seminarians and one for consecrated life. It was quite impressive to share with this “cream of the crop” group.