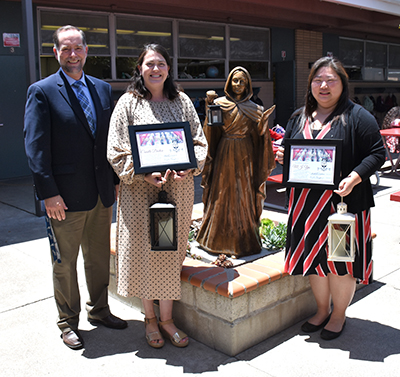 On May 26, following the graduation baccalaureate and student honors ceremony, Principal Joe Ciccoianni announced this year’s Nano Nagle Award recipients. A tradition at the school since 2009, one teacher each year has been honored for exemplifying the charism of Nano Nagle, foundress of the Sisters of the Presentation of the Blessed Virgin Mary, who established St. Norbert Catholic School in 1965. This year, through a generous anonymous donor, there were two teachers so honored, one each from grades K-3 and 4-8.

The process of identifying this teacher involved review of redacted student drawings and essays by a panel of judges. With over 125 submittals, this is not an easy task. Again, this year, every teacher was nominated, making it clear that Nano’s spirit is an integral part of the St. Norbert’s Catholic School (SNCS) culture.

The students are asked to identify the ways in which the teacher of their choice exemplifies a trait of Nano’s. This year students in grades 4-8 were asked to give two examples each of how Nano Nagle’s faith influenced her actions and how the teacher shows her/his faith in their ministry as a teacher. Students in grades K-3 had the option of either writing a statement about why they admired the teacher or to draw a picture of the teacher caring for her/his students. They then could either write why they admired Nano Nagle or draw a picture of Nano Nagle caring for children, the sick, or the poor.

This year’s awardee from grades K-3 is Mrs. Camille Denton, first grade; and from grades 4-8, Ms. Minju (M.J.) Yeo, fifth grade. One of the many validating statements students wrote about Mrs. Denton was: “She makes everything fair and square. I would pay anything to go back, but I’m growing up and I have to leave.” And about Ms. Yeo, one student wrote: “I have learned and became so much closer to God that I want to go to church on weekends now.”

In recognition of this award, Principal Mr. Joe Ciccoianni presented a check, a lantern and a certificate to each awardee. The lantern is a tangible symbol of Nano Nagle and her work among the poor of Cork, Ireland, where she would teach the children all day in defiance of the English Penal Laws and venture out in the dark of night to minister to the sick and the poor. Hence, she became known as “the lady of the lantern.” Clearly, through the work of teachers like Mrs. Denton and Ms. Yeo, her light still shines.