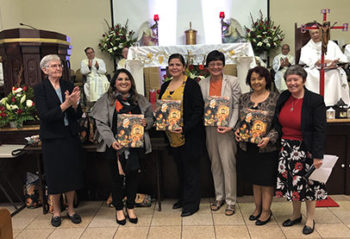 On January 11 the sisters, volunteers and donors of Presentation Learning Center gathered at San Miguel Church in Watts to celebrate a Mass of thanksgiving for the 20th anniversary of Presentation Learning Center. Bishop Joseph Sartoris, along with several other priests from the parish and wider area, celebrated Mass. A statue of Nano Nagle was carried up in the entrance procession, followed by the Watts friends of Nano, who each carried a lighted lantern. The statue will later be placed permanently in the Learning Center garden overlooking the streets of Watts. 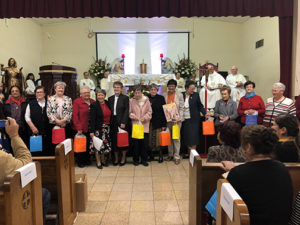 After Mass, each group who has supported the Center during the past 20 years was called forth to be recognized and honored, receiving icons of the Presentation of Mary, tote bags with Nano’s photo on them and scarves hand-made by the students at the Center.  At the end of Mass, the statue of Nano was blessed by the bishop and the four original students of the Center. The Ballet Folklorico group then danced and offered flowers to Nano. A delicious lunch was offered outside to all after the Mass. A great spirit of love, gratitude and community permeated the day. 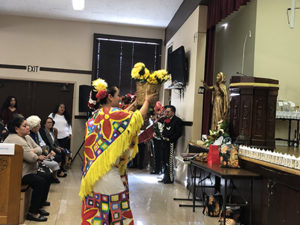 Reflecting later, Sister Mary Dunlea remarked, “It was a poignant moment for me when the Nano statue was brought into the church. It was an embodiment of Nano’s commitment to care for the vulnerable and the poor being lived out in Watts. The celebration was a testament to the empowerment of the people of Watts by living out the Presentation charism as we are reminded in Our Way of Life (constitutions): The congregation is shaped by fidelity to the Gospel as expressed in the spirituality and charism of Nano Nagle. We embody her commitment to education and care of the vulnerable and powerless. In fidelity to the founding spirit, we respond creatively in the contexts where we live and minister. We seek to participate in the unfolding mystery of the reign of God by fostering the values proclaimed in the life and mission of Jesus. (C2)”

A Short History of Presentation Learning Center, Watts, California
In late November 1999, Sisters Catherine Burke and Jane Bonar moved into a rented house in Watts as part of their sabbatical after 10 years in U.S. provincial leadership for their congregation. They visited the families in the area asking them, “What would you like us to do for and with you?” The people responded that they wanted to learn English, become U.S. citizens and to work with their children. Sister Catherine invited the women to join her in their home garage to crochet and knit and Sister Jane taught guitar to the area teenagers in the living room.  The women’s children played on the front patio of the sisters home.

On January 11, 2000, the sisters began teaching English and citizenship preparation in the San Miguel Parish Convent around the block from their home. By June of that year, when their sabbatical ended and after a lengthy discernment which involved all the sisters in the province, they received permission to stay in Watts for two years, at the end of which they had to be financially self-supporting.

Thanks to the generosity of San Miguel Parish, they had the parish convent and hall to use rent- and utility-free, an arrangement that continues to this day. The regional bishop at the time, Joseph Sartoris, invited them to speak at wealthier parishes in the region, where they gained many donors and volunteers.  Sister Mary Sullivan of the New Windsor, N.Y., congregation joined Sisters Catherine and Jane in 2003, staying until her death two years ago.

Many sisters of other congregations also offered their services. Over these past 20 years, at least 15 sisters have volunteered at the Center.  Currently eight continue teaching there today.

Many lay people from Watts and all of Southern California volunteered, many are retired teachers. Today there are 70 weekly volunteers at the Center and many, many more who volunteer off-site. It is truly a collaborative ministry, with many parishes and donors who sustain the Center.

Over the years the student body has grown to 150 adult students in morning and night school studying ESL, technology, preparing to become U.S. citizens and preparing for their GED exams. They also take part in classes in music, dance, crafts and sewing.  The pre-school age children are taught basic English while their parents are in class.