Throughout September until October 4, the Feast of St Francis, Christians throughout the world observe the Season of Creation. This began with the Orthodox Church and then spread throughout Europe. Season of Creation was endorsed by Pope Francis in his encyclical Laudato Si, the World Council of Churches, Global Catholic Climate Movement and the Anglican Network as an opportunity to bring Christians together in concern for our common home. 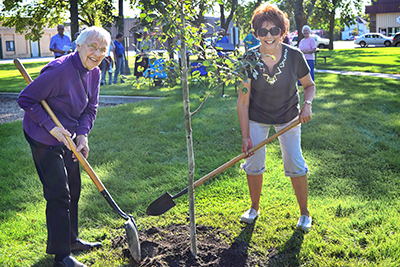 Sister Gabriella and Patti Bosch plant a tree at the prayer service.

Although we cherish creation, at times we are irresponsible and abuse the earth’s gifts and use our surroundings as only for our use and consumption. We forget that everything in the world is connected. Yet 20 percent of the world’s population consumes resources at a rate that robs poor nations and future generations of what they need to survive.

The Aberdeen Presentation Sisters, along with local churches, held a prayer service in Aldrich Park complete with a smudging ceremony. They asked God’s forgiveness for misuse of the earth. An Ash tree, symbol of giving back to nature, was planted. Copies of the Season of Creation pledge were distributed. The 17 attending were encouraged to go to the Season of Creation website and sign the pledge.