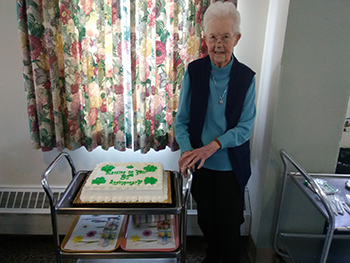 On July 1, 2019, the sisters in the Presentation motherhouse in San Francisco gathered for a special tea honoring Sister Kieran O’Connor on the 80th anniversary of her entrance.

Four of the sisters in attendance had been students in Sister Kieran’s first-grade class. Little did they know then that their teacher would become a lifelong colleague and friend. Everyone in attendance sang Irish songs, enjoyed the delicious refreshments and delightful reminiscences about her long and storied tenure in the congregation.

Sister Kieran entered the congregation in 1939 following her graduation from the Academy of the Presentation. Education has been her life ministry and teaching her joy. Over the past 80 years she has taught and served as an administrator in many of the Presentation schools including Saint Agnes and Saint Anne Schools in San Francisco and Saint Patrick and Saint Christopher Schools in San Jose. She also opened and served as principal at Saint Catherine School in Morgan Hill. Over the course of that career she earned many accolades including being nominated for the teacher of the year award in San Francisco and the Sister Miriam Joseph Farrell award in San Jose, being chosen as one of San Jose Magazine’s 2006 educators of the year, and being honored by Governor Jerry Brown for her 75 years as a Catholic educator with an official declaration of December 18, 2015, as Sister Kieran O’Connor Day.