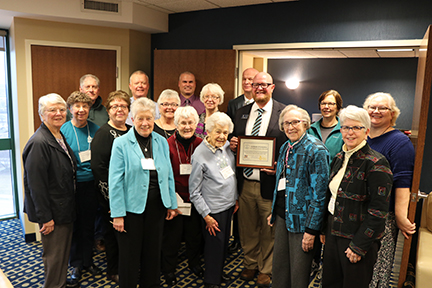 Pictured above: Members of the Tri-State Coalition Against Human Trafficking and Slavery and local and state officials surround the hotel manager of Grand Harbor Resort in Dubuque.

For several years now, the City of Dubuque and Dubuque County have participated in the national effort to make the month of January Human Trafficking Awareness Month. At the request of the Tri-State Coalition Against Human Trafficking and Slavery, a proclamation was made at the first meeting in 2019 recognizing January as “Human Slavery and Human Trafficking Prevention Month.”

Dubuque Presentation Sisters Marie Barth, Sheila Ann Dougherty, Anne McCormick and Joy Peterson were among the area women religious who established the coalition five years ago to address the issue of trafficking in the tri-state area. Sisters Marilou Irons and Brigid Stanley, and Associate Sue Murphy, have since contributed their skills to the work of the coalition. Initially, the focus of the group was on education of adult groups in the area. Recently, several coalition members have been trained to help hotel and motel staffs recognize victims of trafficking.

Several national hotel chains have committed to training staff in understanding the indicators of trafficking. Aided by organizations like ECPAT, which has set the goal of ending child slavery at the source, travelers are also invited to notice potential trafficking victims. In travel settings, ECPAT recommends watching for signs, such as an adult always speaking for the child in a way that prevents the child from making eye contact or showing physical or verbal autonomy.

Polaris Project, a nation-wide organization founded to end human trafficking, defines human traffick-ing and slavery as “the business of stealing freedom for profit.” Traffickers trick, defraud or threaten vulnerable populations and then benefit from coercing them into service for sex and/or physical labor. The project estimates that nearly 25 million people are trapped worldwide by traffickers. They sponsor a National Human Trafficking Hotline which allows them to gather statistics for reported cases in the U.S. In the year 2017, nearly 9,000 calls were made. The hotline number is 1-888-373-7888.