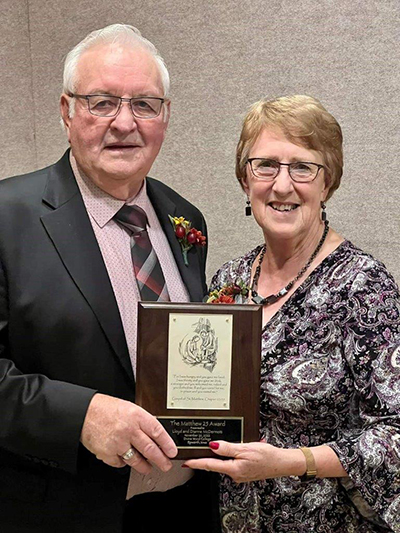 On November 22, Presentation associate, Dianne McDermott and her husband, Lloyd, were presented with Divine Word College’s Matthew 25 Award for their many years of service to the college, as well as to people around the world.

This award honors those who help the poor and marginalized. It was established in 2001 to recognize those in or connected to the area who minister in the spirit of the Gospel message put forth in Matthew 25:35-36, “For I was hungry and you gave me food, I was thirsty and you gave me drink, a stranger and you welcomed me, naked and you clothed me, ill and you cared for me, in prison and you visited me.

In the past 24 years, Dianne and Lloyd have shared their home, their family and their hearts to welcome students from around the world. They have provided housing for 12 international students, including 10 who were enrolled at Divine Word College. With open arms and hearts, the couple taught students about American culture and gave them an immersive environment where they could practice their new English skills. In return, Lloyd and Dianne said the students taught them about the cultures of their own countries, which included Japan, South Korea, Haiti, France, the Philippines, Belarus and China. The couple is also an important part of the Friends Across Nations Club at Divine Word, serving as a surrogate American family of sorts to international students who live on campus. In addition, Dianne and Lloyd volunteer their help at the Epworth Community Meal on many Friday mornings. They certainly know how to feed the hungry and welcome strangers.

Their charitable efforts extend outside of Divine Word College, as well. After retiring, Dianne and Lloyd decided they wanted to travel and leave a “footprint” behind wherever they went. Since then, they have worked with numerous organizations to pitch in after natural disasters and help people living in poverty both in the United States and abroad.

During a trip to Haiti, Dianne helped to serve people in a clinic that was basically a shack. When she returned home, she organized an effort at St. Patrick Church in Epworth, Iowa, and with the help of the people of St. Elizabeth Pastorate, raised $17,000 to fund the construction of a building that is used for a clinic, church and school in Soliette, Haiti.

Lloyd said that as a boy, he didn’t understand why he needed to study geography because he knew he would never go to any of the places on the world map. Today, he says the experiences of traveling and serving as a host family for international students has allowed him to feel more connected to world issues. Dianne agreed, saying that travel has a way of making the world smaller. “When you go to a country and you see their culture and you meet the people, you can’t look at it as just a place on a map anymore,” she said. “There are good people wherever you go.” Dianne and Lloyd have four children and 10 grandchildren but after many years of service and sacrifice, the love of their new extended family stretches across nations.

Dianne became a Presentation associate in August 2014 and is a member of the Servant Seekers associate group. In July 2022, Dianne worked with Sister Paula Schwendinger’s HOME program to gather volunteers in rural Dubuque County to teach Hispanic immigrants English and help them learn about the American culture.