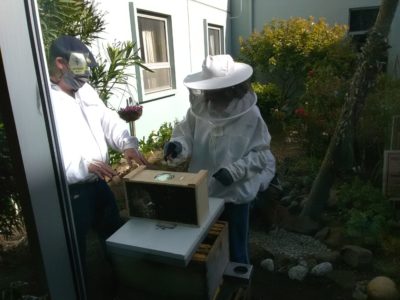 Since 2019, the Presentation motherhouse has hosted a beehive, which is owned and managed by the neighboring University of San Francisco. The hive is in a central courtyard near the chapel and most often (and safely) watched by the sisters through the windows.

The initial colony of 15,000 bees did not survive their first winter. The next group lasted longer but, alas, were also victims of the wind and cold last year. Smoke from wildfires has also contributed to widespread colony collapses in California in recent years.

So the sisters were very excited when USF beekeeper Joe Murphy and his apprentices arrived on April 2 to place a new queen and her colony in the hive. When he returned a week later to check on them, the bees charged him aggressively in defense of the hive – a good sign! The bees are not consuming the auxiliary sugar water attached to the hive, prompting one sister to remark that the bees may have given up for sugar for Lent, but in reality they are consuming honey that remained inside from the previous bees. All in all, the bees are home and seem to be doing very well. The sisters look forward to watching the activity again and enjoying the delicious fruit of the bees’ labor when the honey is harvested, while offering a safe place for these at-risk, critical pollinators to thrive. 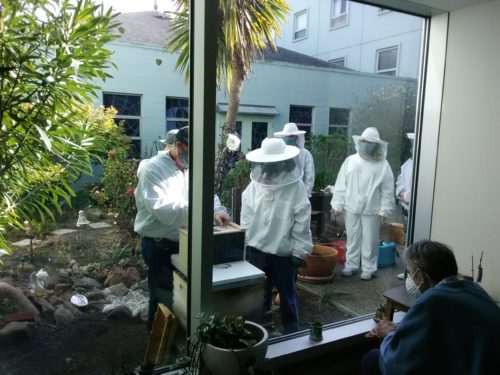 Our sisters are able to watch the bees from inside the motherhouse window.