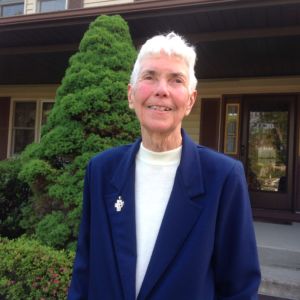 Sister Mary O’Neill of the New Windsor, New York, congregation, was proud to learn she will be the recipient of the Father Victor Yanitelli Award. The award will be given by SOAR (Support the Aging Religious) at their 30th anniversary SOAR! awards dinner on Wednesday, September 21, 2016, at the New York Athletic Club in New York City.

Sister Mary taught for over 20 years in the Archdiocese of New York. She then began working for Catholic Charities in Ulster County, N.Y., where she oversaw an outreach program for the elderly and homebound, coordinated parish services for the homebound and studied for a certificate in hospital chaplaincy and hospice work. From 1983 to 2002, Sister Mary also sat on the board of directors for Reaping the Harvest in Marlboro, N.Y., which provides assistance to migrant farmworkers.
In 2003, at an age when most people are long retired, she began her third career, helping the disadvantaged at the Newburgh Ministry. Five women religious started the ministry in 1983 in response to the needs they saw in Newburgh’s streets. Sister Mary’s work at Newburgh Ministry includes advocacy, informal case management and referral to rehabilitation services.