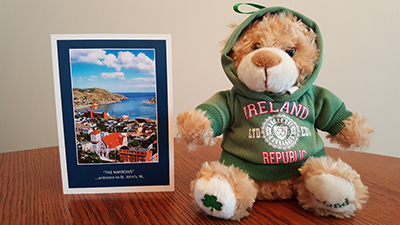 From an Island to an Island
Paddy’s Day has forever been a big day in Newfoundland, the home of so many Irish immigrants who kept the traditions and memories of their homeland very much alive! Lovingly counted among them are our many Irish Presentation Sisters who first came in 1833. We continue to honour them all and their wonderful legacy to us. We are not far from the ole sod in many ways! Locally our celebrations are eagerly anticipated and for some they last a whole week.

Looks and sounds like we have never left Ireland as every year we gather at our motherhouse, joined by our Irish Christian Brothers, to celebrate. After Sunday liturgy in our chapel all of our sisters in the area gathered together with our motherhouse sisters to share a wonderful meal prepared and served so “tastefully” by our wonderful kitchen and dining room staff. 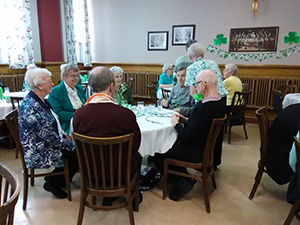 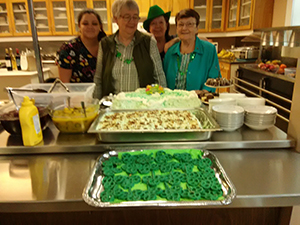 Our meal was followed by “Irish” entertainment provided by some very special folks who have been doing this for years as part of their own St. Patrick’s Day. One is Sean, a nephew of one of our sisters, Sister Patrice Sullivan, which is how it all began. Sean originally had some friends join him along with Patrice’s brother, everybody’s “Uncle Alf.” Although Sister Patrice and Uncle Alf have long since joined the ranks of the saints and angels, “Sean and friends” continue to come. Wouldn’t miss it! Looks and sounds as Irish as it gets! Close your eyes and you could be in Ireland itself as the lilt of Irish music and laughter fills the air, with just enough floor space to allow for a dance for anyone wanting a “scuff”! At one point Sister Roisin joined them for a lovely musical rendition of “The Spinning Wheel.” Special thanks again, Sean, Sheldon and Carl!

A favourite all-time request at any gathering is called “From an Island to an Island” with lyrics penned by one of our own from Newfoundland, Loyola Hearn, who recently was Canada’s Ambassador to Ireland. They don’t come any more Irish than Loyola. Another “Irish” Newfoundlander, Kevin Collins, composed and recorded the music, capturing the spirit of so many of our ancestors who came from Ireland and made their home here. The lyrics can be found below. The words say it all! Click here to listen and enJOY!  https://youtu.be/JtB6bMC6DOU 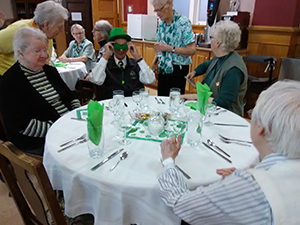 My father left old Ireland so many years ago,
He left his home in Galway where the green, green shamrocks grow;
He met my darling mother on a boat to Newfoundland, And it didn’t take him long before he’d won her heart and hand.

They both came to this island as happy as could be,
To settle down together and raise a family; They built a little cottage and started to combine,
The green of the shamrock with the green of the pine.

From an island to an island, from the green to the green,
They left their homes to settle in a place they’d never seen;
They exchanged the hills of Newfoundland for the ones they’d left behind, And the green of the shamrock for the green of the pine.

As their family grew around them, their eyes shone bright with pride, They’d go to church each sunday morn’, strolling side by side;
Each evening ’round the turf-fire to heaven would ascend, The decades of the rosary for all in Ireland.

Now the years passed by so quickly, and death we all must face, We laid our loving parents in their final resting place;
Yet they taught me to be thankful for this heritage that’s mine, The green of the shamrock and the green of the pine.