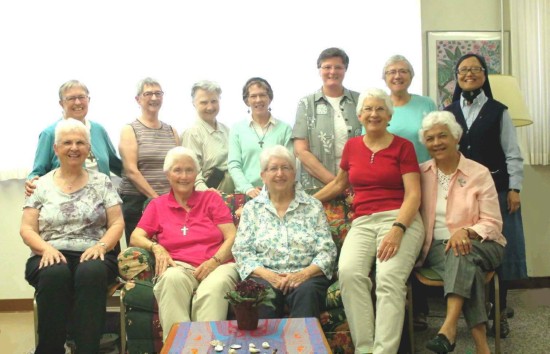 Member participation before the Santa Clara Super Bowl in February 2016 was rewarding and effective. It showed our teamwork and our growth in cooperation with local governments and organizations. This retreat gave reflection time for evaluation and planning for next steps.

Sheila Novak, our facilitator, started our time together inviting each participant to “be” a woman of the Bible, one either forced to take the place of a childless wife (Hagar), or who met death through the vow of another (Jethro’s daughter), or women who were publicly identified as prostitutes. Our members spoke of these women eloquently, sympathetically, and with some critical modern perspectives on women.

Sheila then asked the group what worked and what didn’t work in preparing for the Super Bowl. Thanks largely to the efforts of Sister Marie Jeanne Gaillac, CSJO, and her team members, we had well-marked, accurate maps of hotels and motels for visiting in the cities and towns of the San Francisco Bay Area. Members paired up for these visits with friends, Associates, students from local schools and universities, and local parishes, carrying packets containing useful information for the places we visited. Over 300 hotels and motels were visited. The information gained will help us in the building of an infrastructure for the future. Unfortunately, this scourge of human trafficking is not going away any time soon.

In retrospect the project was well-organized, specific and doable. Hotel visits carried out before the America’s Cup in 2013 and with Choice Hotels in 2014 proved to be helpful preparatory experiences. People in the Bay Area know more about trafficking than in earlier years. Support from local legislators, most notably from Congressional Representative Jackie Speier, has helped shed more light on the problem. Local law enforcement is better educated on the issue. However, many areas of concern remain. Transportation centers, nail salons, bars and truck stops are places of concern. Yet-untouched work toward zero tolerance must continue.

After the Super Bowl several members attended an encouraging meeting of the San Francisco Collaborative against Human Trafficking (SFCAHT) at its reporting on the larger experience. There we learned that police recorded 128 contacts with persons of interest and that 84 buyers were arrested. Law enforcement is more cooperative today and technology learnings used successfully will be incorporated in the future.

With Sheila’s guidance four committees were formed for work in the coming year.

1) Legislative Advocacy: Among other tasks, we will continue the work begun in promoting compliance with California state law SB1193 whereby certain establishments such as massage parlors, bars, adult bookstores, and urgent care centers must display posters against human trafficking.

We will continue our efforts to secure co-sponsors for federal Senate Bill 1968 still pending, whereby certain companies would be compelled to report annually on their efforts to eliminate human trafficking and forced labor in their supply chains. Continued efforts will be made to encourage the purchase of fair trade products.

2) Communication: Continue publishing the coalition newsletter and expand readership. Learn to use social media better as a means of communicating about human trafficking. To help us to do that, we will receive training on social media at our September Coalition meeting.

3) Education/Raising Awareness: Provide ongoing education for ourselves and others. Organize materials to be used in various presentations on human trafficking. Focus more on raising awareness about labor trafficking; invite speakers on labor issues.

4) Follow up of Hotel Project: Continue visits to Bay Area hotels to assure that all hotels will know how to identify and report possible incidents of human trafficking. Promote a rewards program for hotels that have trained their staff to recognize and report human trafficking.

At the closing, we gathered around a table and each one took a packet that contained a stone with a special word on it. We blessed one another as we read our prayerful words, such as peace, courage and gratitude.