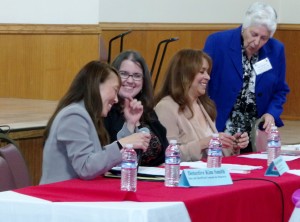 Above: Sister Gloria Loya (far right) consulting with the panelists at a last year’s conference.

Since I began this ministry in Stop Human Trafficking, I have been challenged beyond anything I could have imagined. So often I have asked myself, “How can this be taking place right here in our beautiful Central Coast of California and indeed, within the state, the nation and in our entire world?” My journey is led by the word and by Nano’s lantern.

Those who are now suffering the scourge and the painful reality of human trafficking continue to cry out for freedom and for justice and so we must respond for the sake of the Gospel and for the sake of humanity. In the midst of this darkness there exists a powerful, tangible, living hope because we have met survivors who have found healing and who have become leaders in our communities. Some years ago two Salvadoran sisters, Jean and Sheila, were the first to prophetically raise this issue in California. They began with a profound “spark” when many, particularly in governmental offices, ignored their pleas. We are grateful to them for educating our religious communities about human trafficking.

We may feel that there are so many “issues” to deal with when it comes to justice. I have learned, along with my colleagues working together in this ministry, that this is not a mere “issue.” We have a mission to stop this modern day slavery that is a burden and an evil placed upon the backs of our children, because human trafficking begins with the young who are most vulnerable to predators.

One of our stop human trafficking leaders who chair our Central Coast Coalition is a woman survivor of human trafficking. Her narrative flows from her personal development, her profound healing and transformation that have shaped her leadership.

“Not too long ago, two motorists noticed a young girl on a Monterey highway hanging out with a man – and something about what they were seeing just seemed wrong. She had red hair, wore a tank top and jeans and looked like she could be a junior in high school. When the police came to talk to the girl, they found she was only 13 and the man was her trafficker.

I often think of this story as I drive through the roads in Monterey County. Our roads can be small rural roads or major truck driving routes. We have little motels by the side of the road and some of the world’s fanciest hotels. What often strikes me is how similar these are to the places where I was trafficked when I was a child. Starting in early elementary school and continuing through my teen years, I was taken to truck stops, roadside motels and high-end hotels where I was sold. I was so scared.”

We ask you to become aware and act! Phone your local police should you suspect something. Use the national hot line: 1-888-373-7888.

Sister Gloria Loya says, “We have a mission to stop this modern day slavery.”