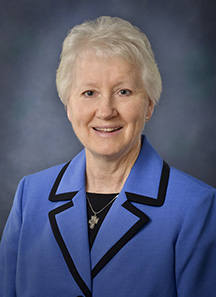 Sister Janice Klein was born in Dell Rapids, S.D., and began her faith journey at St. Mary’s where she graduated from high school. She entered Presentation Convent in January 1967. She received her associate’s and bachelor’s degrees in education and shared her love of learning by enriching the lives of hundreds of elementary students in schools in Aberdeen and Mitchell, S.D.

Sister Janice went on to earn a master’s and doctorate in pastoral ministry. For 14 years, she served as a pastoral minister in the Chicago area where she accompanied parishioners on their faith journey, privileged to walk with them in times of both joy and sorrow.

In 1992, Sister Janice started the Aberdeen Presentation Sisters’ development ministry, sharing the Presentation mission and charism with all she met and inviting partners to share in this mission. This joyful spirit continues as she is currently the president of her congregation. 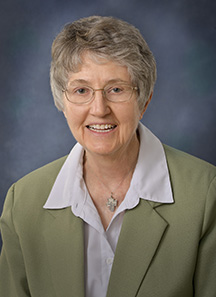 Sister Francene (Ruth Ann) Evans was born in Aberdeen and entered Presentation Convent in January 1957. She received her bachelor’s and master’s in psychology, and a doctorate in higher education.

Sister Francene shared her love of learning as she taught in high schools in South Dakota and Montana before teaching at Presentation College. She later conducted drug education workshops in a 10-state area for the University of Minnesota and taught at the Sioux Falls College, now known as the University of Sioux Falls.

After serving as the vice president of the congregation from 1978-1982, Sister Francene opened her heart as she walked alongside and assisted Vietnamese refugees beginning life in the U.S. She was later a hospital chaplain before returning to education ministry. At Minnesota West Community and Technical College, Sister Francene taught and was the coordinator of the human services programs. In 1992 she spent one semester teaching psychology in Japan while also studying Japanese history and culture. It was there that she experienced, “in a minor way the challenges that newcomers to my culture undergo.”

Currently Sister Francene lives at Presentation Convent and, since 2010, has served on the Presentation Sisters leadership council. 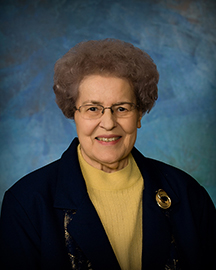 For many years she dedicated herself to teaching and administration in schools in Minnesota and South Dakota, priding herself in knowing all of the students by name. In the late 1970s, she moved into a parish ministry, a ministry she continued until 1997. Sister Catherine’s caring and ambitious spirit then led her to hospital ministry where she served as director of mission services, director of chaplaincy and as a member of the administration team.

She was then elected to the Presentation Sisters leadership council, where she served from 2002-2006. Sister Catherine currently lives in Aberdeen where she continues her love of reading and now devotes herself to full-time prayer ministry at the convent. 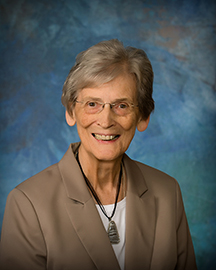 Sister Gayle graduated from Presentation College and received her bachelor’s in education and special education. She went on to receive a master’s in pastoral education.

Sister Gayle loves to give of herself and help others. She served in education ministry for 26 years, teaching in Mound and Anoka, Minn.; Sioux Falls, Mitchell and Milbank, S.D.; and Miles City, Mont.

Over the next 30 years she served in religious education, home health ministry and pastoral care in cities throughout South Dakota, Iowa, Minnesota and Wisconsin. Ministering with both the elderly and special needs individuals, Sister Gayle opened her heart and shared her compassionate spirit, showing hospitality and dignity to individuals in all of her ministries. 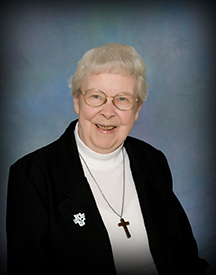 Sister received an associate’s and bachelor’s degree in education. Sister Virginia loved teaching, especially reading, and dedicated over 50 years to educating children in Jefferson, Bridgewater, Dell Rapids, Mitchell, Madison, Aberdeen and Watertown, S.D.; and Willmar, Minn. She touched the lives of thousands of students, in both the classroom and CCD, and enjoyed reconnecting with them when they would stop in to say hello, even many years later.

In 1991 she began a ministry to the homebound at Immaculate Conception Parish in Watertown. By sharing stories, smiles, laughter, and tears, Sister Virginia brought the love of Christ into the homes of those she would visit.

In 2006, she retired from her ministry work and returned to Presentation Convent in Aberdeen where she is active in the congregation’s prayer ministry. 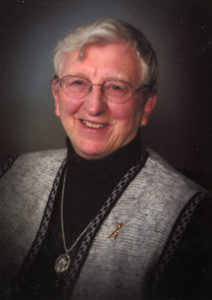 Sister Elizabeth (Mary Laurence) Remily grew up in Turton and entered Presentation Convent in September 1946. She received nurse’s training, which she utilized in her service as a surgical supervisor for 12 years at St. Joseph’s Hospital and (Avera) St. Luke’s Hospital.

In the mid-1960s, Sister answered Vatican Council II’s call to minister to those in need in foreign countries when she traveled to Altamirano, Chiapas, Mexico, where she served at Hospital San Carlos for 15 years. She followed this experience with 12 years at Hospital San Antonio in San Antonio, San Luis Potosi, Mexico.

Sister Elizabeth returned to the United States in 1992 and was instrumental in founding Berakhah House, a ministry to those with HIV/AIDS. In 1998, at age 70, she began another medical mission at Santa Clara La Laguna in Guatemala.

After a brief stay back in the U.S., and with the transition of Berakhah House to a home for homeless veterans, Sister Elizabeth felt the call to serve a foreign mission once more. A fourth foreign medical clinic was founded in the Municipal of Conception Tutuapa, Guatemala.

All of these medical missions, now turned over to local, indigenous religious communities, are still operating. In January 2015, Sister Elizabeth returned to the US and currently resides in Sioux Falls, S.D. 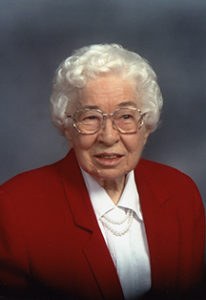 Sister Margaret Anne shared her love for children by teaching for 25 years in elementary schools in Jefferson, Milbank, Sioux Falls and Humboldt, S.D.; and Mound, Minn. She also taught in secondary schools in Aberdeen and Dell Rapids, S.D.; and Mound, Minn. Sister served as a nurse’s aide prior to beginning ministry in pastoral care, in which she served for 24 years.

Retiring from active ministry in 1995, Sister Margaret Anne worked for several years as a volunteer, assisting many with her gracious spirit. She volunteered her time as a sacristan at both Avera Mother Joseph Manor and at Presentation Heights. She also assisted, and then coordinated, the Sister’s prayer line ministry.